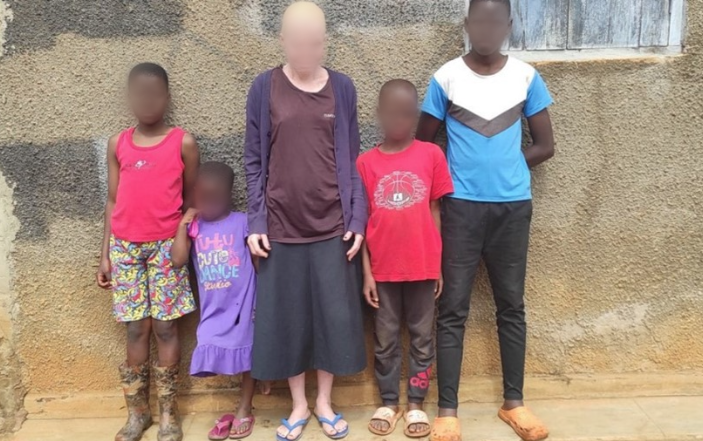 Jane* was born with albinism, a highly stigmatized condition in her home country of Uganda. Albinism is a congenital disorder characterized by a complete or partial absence of pigment in the skin, hair, and eyes. Hassan Mulondo, the general secretary of the Association of Uganda (Africa Albino Foundation), says Uganda has about 250,000 people living with albinism. However, in Uganda and surrounding Sub-Saharan Africa, albinism is misunderstood socially and medically.

Jane grew up in a Muslim community and, in 2007, when she was 26 years old, was married to a Muslim husband. They lived in a town in central Uganda and had four children together. Jane shared with an ICC staff member that her husband treated her well for the first eight years, but in 2015 he married two more wives and began severely mistreating her.

The situation steadily worsened over the next five years, culminating in her husband’s refusal to pay for the basic needs of Jane and her children in 2020. Desperate for a source of income to cover her children’s food, clothes, and school fees, Jane attempted to start her own business making liquid soap. However, it ultimately failed due to her lack of starting capital. For two years, she and her children continued to struggle greatly. Her husband still allowed them to live in their home, but his constant abuse made their lives miserable.

In May 2022, Christian preachers came to her town and preached to her. She began to weep and shared with them her story; how her husband was neglecting and abusing her and her four children, ages 14, 11, 9, and 5. The preachers shared the gospel with her and told her to cast her burdens onto Jesus. At that moment, Jane decided to trust in Jesus and became a Christian.

Jane shared the rest of her story with an ICC staff member. Below are her words:

“After receiving Christ, I went back home and told my husband. The only answer I received from him was that he should not find me still at the house when he returned home from Muslim evening prayers. I thought it was a joke. When he returned home at 10 pm, he asked me two times in an aggressive voice, ‘Did you become a born again?’ I said yes. Before I could finish speaking, he slapped my face and pulled me out of bed. He pushed me outside the house and started throwing my things after me. He went back inside and woke up my four kids, telling them to go outside with their stupid mother, who had decided to become a Christian. He told them, ‘Let her take you to her Jesus.’”

Jane continued her story, “We spent the whole night outside, not knowing what to do next. In the morning, I tried to plead with him not to send us away because we did not have anywhere to go. He said he would accept us again only if I denied Christ and returned to his religion. I could not do that because I knew the Christ I received could not fail me. We began to travel away from our home village, and, while we were on our way out, I remembered my Christian friend living in a town about 20 km away. I called and told her what had happened to my children and me. She told me to come live with her. We stayed with her from May 6, 2022, until July 15, 2022. Since she was married and I had the additional stigma of being an albino, her husband would not care for my children and me for long. Eventually, he started pressuring my friend to make me leave. Because of the pressure, she took me to her father’s place, where he gave me two months to figure out a place for me and my children to live.”

Jane and her family received occasional food support from their new church family. Still, she desperately needed assistance starting a shop to generate consistent income for herself and her children.

An ICC staff member in Uganda heard about Jane’s situation, and, in September of this year, ICC was able to send Jane funds to rent and stock a retail shop with a house attached. ICC staff helped Jane and her children set up the shop and their new home.

In response, Jane said to ICC staff, “I thank God for this shop. My salvation is not in vain now because God has done it for me. I am so excited that I have received my dream. I have desired to own a shop for years, and now I have one. My life will change with this shop, and I will do my best to make it work no matter what.”

We praise the Lord that ICC connected with Jane and that we were able to provide some assistance to her and her children. Most people born with albinism in Uganda suffer from the stigma and lack access to medical care for their entire lives. The rate of albinism in Sub-Saharan Africa is estimated to be as high as one in 1,400, much higher than the global rate of one in 17,000.

Elizabeth Negesa, director of the Uganda-based Elgon Foundation for Persons with Albinism (EFPA), stated, “Besides the stigma they face, people living with albinism also fall victim to people with weird beliefs about them.” She continued, “Men believe that when they sleep with an albino woman, they get cured of HIV/Aids. In the process, these women acquire sexually transmitted diseases and unwanted pregnancies. This leaves the victims struggling to get medication and raising children as single parents.”

Additionally, Elizabeth, who herself has albinism, says that, given their condition, people with albinism often need to make frequent visits to healthcare facilities, where they face discrimination from healthcare providers. Instances abound of healthcare workers turning away people with albinism from their facilities or humiliating them by making their bodies a spectacle. Elizabeth shared how when she went to a clinic to give birth to her first child, medical personnel told her to undress and brought in other nurses to come and see her body. She said, “I regretted why God created me after I saw the nurses laughing at me.”

In many Sub-Saharan African countries, including Uganda, many people living with albinism die from skin cancer between the ages of 30 to 40. Skin cancer is highly preventable but has become a leading cause of death for those with albinism in this region due to a lack of access to proper medical care.

Regarding the struggle people with albinism face to get recognition from Uganda’s government Elizabeth said, “We tried to raise our issues to a commissioner in the Ministry of Gender, but he didn’t give any hopeful reply.”

Elizabeth says that people with albinism who are connected to EFPA have tried to join groups of different People with Disabilities (PWDs). Still, the government has failed to come out and help them fight for their rights. “Even when the government is preparing its budget, they do not in any way allocate a budget for us people living with albinism. We feel isolated, and this makes us live a miserable life,” she said.

Please pray for those in Uganda and elsewhere in Sub-Saharan Africa living with albinism and suffering from neglect and abuse. Please also pray for Jane and her family as they work to provide for themselves through this shop.