Humanitarian disaster looming in the Caucasus 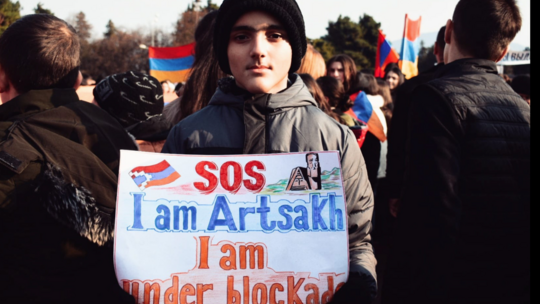 On Dec. 10, a group of Armenian schoolchildren from Nagorno-Karabakh (historical region of Artsakh) traveled to Yerevan, the capital of Armenia, for the Junior Eurovision contest. Armenia hosted the European song-competition for teenagers as a country that won last year’s international song contest for juniors.

The children and their supervisors traveled to Yerevan using the only road that connects Nagorno-Karabakh (NK) to the outside world – the Stepanakert-Goris highway. Little did they know that they would not be able to return to their families.

“After the Junior Eurovision was over, we tried to go back to our homes. But the Azerbaijani activists have blocked the road. Now we are stuck in Goris (a town in southern Armenia) and staying in a local hotel.,” said Aida Gyanjumian from Artsakh’s Ministry of Education, with whom I talked on the phone.

For more background information: about 100 years ago, when the Bolsheviks were coming to power in what later would become known as the Soviet Union, the region of Nagorno-Karabakh (NK) was severed from Armenian territorial administration and placed as Armenian autonomy under newly created Soviet Azerbaijan’s administration, against the will of its Armenian population. Dr. Audrey Altstadt, perhaps the most knowledgeable specialist on Azerbaijan in American academia, linked the decision to make NK part of Soviet Azerbaijan to the “ensuing backdoor tactics” of Stalin.

By 1923, the Bolsheviks transformed NK into what they called a self-governing autonomous region within the boundaries of Soviet Azerbaijan. In the late 1980s, when Armenians of NK, inspired with the democratization processes in the USSR, called for reunification with Armenia, the Azerbaijani authorities responded with violence attacking and killing hundreds of Armenians in cities located hundreds of miles away from  NK proper, including Sumgayit (1988 February), and capital Baku (1990 January).

Recently, the U.S. National Security Archive of George Washington University has made public the diaries of Anatoliy Chernyaev, advisor to the last Soviet leader Mikhail Gorbachev. In his January 1990 entry, Chernyaev admitted that “MS (stands for Mikhail Sergeevich [Gorbachev]) did not have a political solution for the NK problem, “except for the natural responsibility of protecting the people from pogroms, massacres, having Armenians burned in the streets, and the like.”

In 1991, based on the existing Soviet law and the international norm of self-determination (The same norm that paved the way to the decolonization of Africa), the Armenian people of Nagorno-Karabakh proclaimed their independence from Azerbaijan. Moving forward, the Azeri attacks intensified, resulting in a full-scale war. For a while, Karabakh was under siege, totally cut from the outside world. On Dec. 19, 1992, the U.S. Department of State’s spokesperson, Joseph Snyder, said that “Armenia was facing a catastrophe.”

By the early 1990s, Azerbaijan and its “cousin nation” Turkey (these two neighbors of Armenia share ethnic heritage) imposed blockades against Armenia – a landlocked country heavily dependent on land connections. “Armenia is not self-sufficient in grain and energy. We want to send aid, but how do you get the stuff in,” said Snyder at a press briefing. The U.S. administration, together with Russia and France, formed the so-called Minsk Group that would seek a solution to this conflict and decide the final political status of NK. Once a ceasefire was signed in 1994, relative peace came which ended in late 2020 when Azerbaijan, supported by Turkey and with the help of mercenaries from the Middle East, launched a full-scale offensive. By the time an agreement was reached in November 2020, they had occupied most of NK. Active hostilities stopped here with the deployment of Russian peacekeepers.

Today, 30 years after the December days when the Department of State referred to the situation in Armenia as “catastrophic,” another humanitarian disaster is looming in the Caucasus. On December 12, under fabricated environmental pretext, Azerbaijani activists blocked the road connecting Artsakh and the world. With winter temperatures averaging between 38 and 56 Fahrenheit, the people of Artsakh have been left without outside connection. Artsakh’s Health Ministry has halted the planned surgeries, classes are disrupted, families are divided, and towns and villages paralyzed. “Supplies begin to run low,” Eurasianet reported.

The blockade by Azerbaijan faces wide international condemnation. Ned Price, the U.S. Department of State spokesperson, at least twice has called on Azerbaijan “to restore free movement through the corridor,” describing the closure as an act with “severe humanitarian implications.” His Russian counterpart Maria Zakharova said: “We expect the restoration of a full-fledged transport link in the very near future.” Russia’s representative to the United Nations expressed similar hopes last Tuesday when the UN Security Council members discussed the humanitarian situation and urged an end to the blockade.

The Dutch parliament adopted a resolution saying that “Russian peacekeepers do not intervene in that area and that this situation threatens to create a humanitarian emergency for the population of Nagorno-Karabakh.” Russia’s Foreign Ministry rebuffed the criticism of its peacekeepers. “The Russian Defense Ministry and the Russian peacekeeping contingent have been actively working all these days to de-escalate the situation,” Zakharova added at the press briefing. The Pope said he is “concerned about the situation created in the Lachin Corridor in the South Caucasus.” European authorities and elected officials from Netherlands, France and elsewhere made similar statements. But Azerbaijan’s position, emboldened by the support of Turkey, remains unchanged. Turkey’s Foreign Minister Cavusoglu reiterated the country’s support to Azerbaijan.

With the international community’s attention more focused on what is currently happening in Ukraine, Azerbaijani autocrats stay largely unpunished for threatening the very existence of 120,000 people in Artsakh. Greek, Armenian, Kurdish, Christian solidarity, and other organizations expressed a Genocide-warning. “Conditions are present for genocide against the indigenous Armenian population of Nagorno Karabakh (Artsakh),” is noted in their statement.

The Armenian American community is expecting a statement from President Joe Biden. The United States is among the few powerful nations that can prevent the looming humanitarian disaster against the indigenous Armenian people of Nagorno-Karabakh.