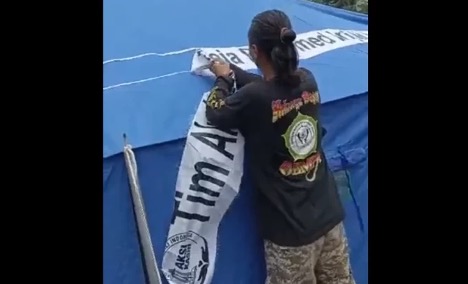 11/28/2022 Indonesia (International Christian Concern) – The earthquake in Cianjur, West Java, Indonesia, on Monday, November 21, 2022, resulted in many casualties. Around 323 people were killed, and nine more individuals are still reported missing due to the quake.

Both domestic and international aid organizations poured into Indonesia in order to help the thousands that were displaced during the quake and provide medical care for those who were injured. During the rescue effort, a video went viral of some unknown individuals removing a church’s name from a humanitarian aid tent that was providing care for earthquake victims in Cianjur, West Java.

In the video circulating on social media, some people can be seen dismantling the words ‘The Indonesian Evangelical Reformed Church’s Love Action Team’ from the outside of the tent.

The Governor of West Java, Ridwan Kamil, condemned the action, saying, “This is very regrettable and should not happen again. The identity label of the tent provider was removed by unscrupulous residents in the refugee camp in Cianjur.”

Ridwan Kamil said that natural disasters could happen to anyone, and aid providers should be allowed to help from various groups, regardless of belief or religion.

The governor also said that the church labeling the aid tent with its name was not an unusual action. “Aid providers using flags, banners, and labels is a normal thing because maybe it is part of reporting accountability to donors who trust them,” he said.

Ridwan Kamil has asked the West Java Police Chief to follow up on the matter.

“Even though we are not brothers in faith, we are still brothers in nationality and humanity,” he added.