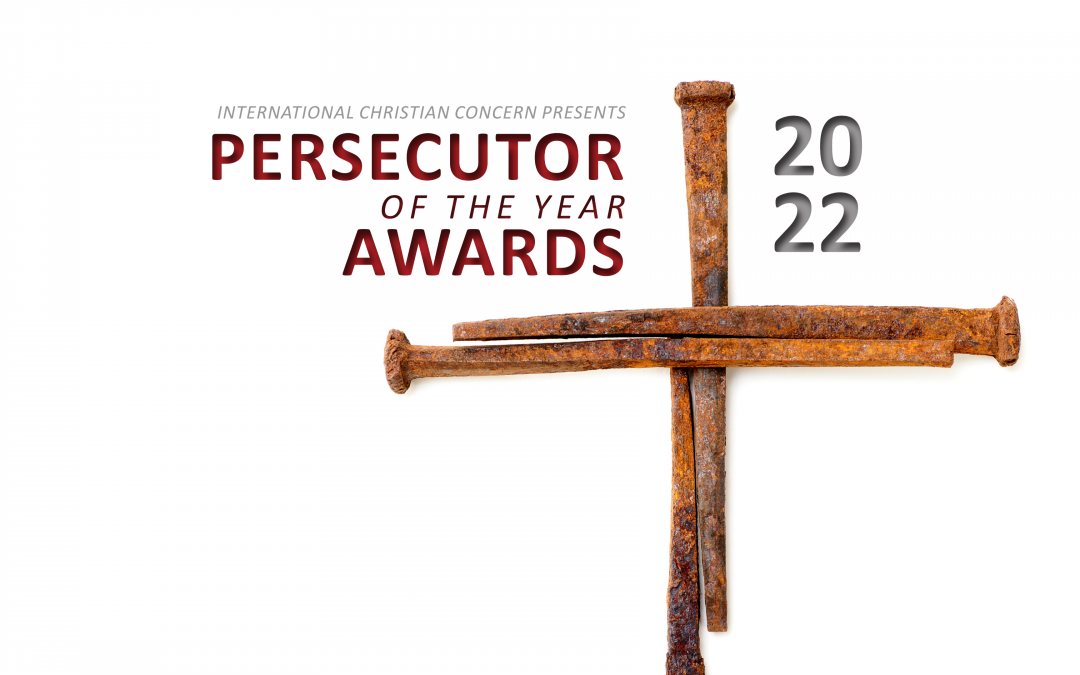 WASHINGTON, D.C., June 29, 2022 – International Christian Concern (ICC) today revealed its annual “Persecutor of the Year Awards” report at the International Religious Freedom Summit in Washington, D.C. The comprehensive 150-page document lists the world’s top 16 persecutors of Christians across the globe within the last year, breaking down these actors by country, entities, and individuals while documenting their activities and methods.

The top three “2022 Persecutor of the Year Awards” go to the following dis-honorees:

• COUNTRY: Afghanistan – In the fallout of the U.S. withdrawal from Afghanistan, the Taliban assumed de facto control of the government, declaring a new Islamic Emirate of Afghanistan. By the end of 2021, the Taliban employed harsh tactics to expose the country’s Christians. This has brought persecution in Afghanistan to its highest levels since the Taliban’s first government, established in 1996.

• ENTITY: Fulani Militants – This is a faction of the wider Fulani people group, who represent the largest nomadic ethnic group in Nigeria. Since 2000, the Fulani militants in Nigeria have killed tens of thousands of Christians and left many more homeless. Having seen increasing violence against Nigeria’s Christian population in the Middle Belt, it is alleged that the Fulani militant aggression is aided by stakeholders within the Nigerian government.

• INDIVIDUAL: Ayatollah Ali Khamenei – The Grand Ayatollah of Iran serves as the country’s Supreme Leader, an honorific title for his clerical role in Shia Islam. As the leader of Iran, Khamenei exerts control over every aspect of Iranian life, both physically and spiritually. As an Islamic republic, Iran poses severe limits on the ability of Christians to practice their religion, enforcing a hardline regime that allows the brutal torture and execution of many Iranian Christians.

Jeff King, president of ICC, along with testifying survivors of global religious persecution, provided insight into the report during a press conference at the International Religious Freedom Summit.

“Across the globe, Christians are beaten, imprisoned, tortured, and murdered simply because of what they believe in. I’ve been doing this for 20 years, and it’s not getting better but getting worse,” said King. “Religious freedom is often a very complicated subject. This annual report is a primer for our allies to understand and see it.”

Akram, a Muslim background believer originally from Iran, who has been assisting ICC in rescuing Christians in Afghanistan, shared stories from those with whom she is in contact. “With all the pain and suffering that they are going through, their faith is unbelievable,” she said.

Following global headlines earlier in June detailing the massacre of at least 40 worshippers from St. Francis Xavier Church in Ondo, Nigeria at the hands of the Fulani militants – which was awarded Persecutor of the Year in the “Entity” category — ICC featured a video testimony from a partner in the country.

“We call on the people in the West to properly understand the fact that what is going on in Nigeria, persecuted by the Fulani militants, is genocide,” said Rev. “Gab,” who addressed the crowd under an alias and with his face blurred for security purposes amid the ongoing violence in the region toward Christians. “The government should not overlook its responsibility in dealing with these militants. The dictionary definition of genocide is targeting an ethnic group and killing them in large numbers. The Fulani militants have been doing just that.”

The press conference also featured via video Dr. Daniel Shayesta, a persecution survivor from Iran. Shayesta was one of the radical Muslim leaders who helped start Hezbollah. He later became a candidate for the Islamic Parliament, but his growing political opposition to the Ayatollah resulted in an arrest and death sentence.

He managed to escape to Turkey and began a “journey to faith in Jesus Christ,” establishing the organization Exodus From Darkness in 2000.

“I do not think all the prisons in the world are as painful as those of the Ayatollah – especially for female protesters,” Shayesta said. He described the torment that the women who opposed the Ayatollah suffered, becoming sex slaves before being killed for what they believed. “It is because of the Ayatollah’s viciousness that now many Iranians hate Islam… Christ is the only solution to the cruelty of the Ayatollahs.”

Rashad Hussain, Ambassador of International Religious Freedom, offered remarks in person that praised ICC’s work. “The efforts of International Christian Concern are very critical. I want to commend your leadership,” he said.

To download a full copy of the ICC “Persecutor of the Year Awards” report, visit persecution.org/poy.