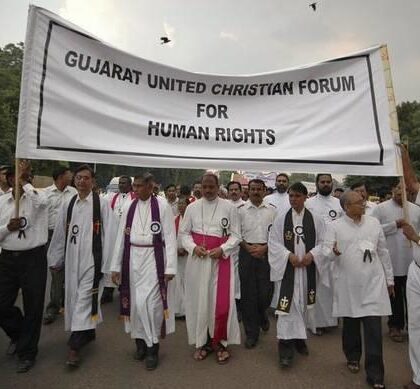 06/14/2022 India (International Christian Concern) – The interdenominational Indian rights group, United Christian Forum (UCF), demanded this week that the nation’s government take action in response to escalating violence and mistreatment of the Christian community. UCF presented data to support their demands, citing 207 cases of persecution so far in 2022 and 505 cases last year in 2021. These cases of persecution include physical assaults, false imprisonment, vandalism, forced church closures, harassment, and social ostracization. In a press statement, the UCF president stated, “This data flies in the face of statements by government functionaries and leaders of the ruling party at the center and in the states that there is no persecution and that there are only a few stray incidents by fringe elements.”

The many examples of persecution include the case of a 65-year-old Christian woman and her son attacked in May of this year. When they professed their Christian faith, they were first threatened with a social boycott and then beaten and seriously injured, requiring the old woman to be hospitalized. Numerous other cases can be cited, but the mistreatment of the Christian community is perhaps best highlighted by the stark contrast in the way Christians are treated in the legal system compared to anti-Christian offenders—Christians are often falsely imprisoned on charges of forced conversion while their persecutors often act with impunity, sometimes even filming their crimes with no repercussions.

Advocacy on behalf of India’s Christian community by organizations like the United Christian Forum is critical since India’s government has been highly resistant to recognizing the mounting evidence of persecution. The Indian government responded negatively, for example, to the US State Department’s June 2 report on international religious freedom in the country. They responded in a post that critical statements made by US officials were motivated by bias. We pray that the Indian government would change course to recognize and address the worsening persecution confronting Christians in India.