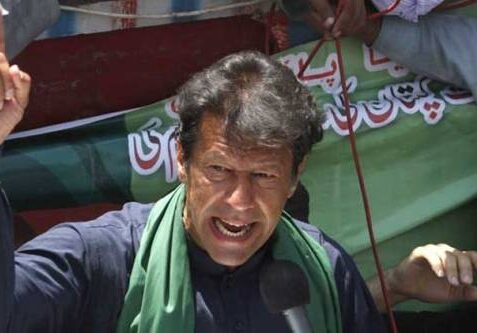 04/28/2022 Pakistan – In the last few weeks, much of the news in and about Pakistan has revolved around Imran Khan, the former Prime Minister who was voted out of office. Many blame him for mismanaging the economy and spinning conspiracies to cover his negligence and inadequacy.  However, some revere Khan as a hero. Khan did much to solidify Islamic adherence, such as creating an authority to censor media and changing education to highlight Islam. For fanatical Muslims in the country, these actions were justified and brought their nation closer to an Islamic welfare state. Those who disagree with him are called traitors or are accused of taking bribes at the cost of Pakistan’s integrity.

A shocking video posted by a Pakistani anchor showed a father promising to slit his child’s throat if former PM Imran Khan wills it. The video was reported on and translated by UCA News. The maniacal man said, “The final solution is to jump off this truck or the [national monument] Minar-e-Pakistan for my leader. Point the camera to this kid. By God, if Imran Khan gives a signal, I will slit his throat right now. These are my genuine feelings. I will sacrifice my whole family for Imran. He has earned enough honor and fame. He wants to make us a united, honorable, self-respecting nation.” The Pakistani anchor who posted the video further described the hysteria, “It is not a political movement; it is a complete religion with Niazi [Khan] as its god. Don’t argue with these people. They will die and kill you as well.” If the Pakistani anchor’s warning is true, there will be violence against those who stand against the deposed Khan.