Why are Christians persecuted abroad?

The question may sound ridiculous to some. “Because Jesus said that Christians would always face persecution,” “Because Satan is opposed to the work of the Church,” “Because the Gospel speaks directly on matters of sin, absolute truth, and redemption.”

“Ok, so why does any of that matter? Persecution shouldn’t be allowed regardless of why it exists.” That is true, but specific situations require specific tools. You don’t use the same socket wrench for every repair on a car simply because it helped you change a tire. The same is true here. The solution for persecution in one country may not work in another (and in some cases, could even make the situation worse!).

If we’re going to meaningfully combat persecution anywhere in the world, we must know what “kind” of persecution is going on. We need to be informed of what is actually going on.

The Spectrums of Persecution

On the one hand, persecution can be motivated by a desire to exercise control. This is the case for countries like modern China and the former Soviet Union. Here, Christianity (or any minority religion) presents an alternative, opposing worldview to the powers at be, and the powers at be wish to stamp out any and all competition. Governments may dislike a religion simply for the fact that it is not theirs and they cannot control it.

On the other end of the spectrum, you have persecution that is religiously motivated. Here, persecutors see Christianity (or any minority religion) as an affront to their own belief system. The animosity can spring from causes such as jealously over loosing followers, loss of community influence, or a need to “stamp out heresy.” It can take many forms, but ultimately what fuels this form of persecution is one religious community deciding it cannot live peaceably with another. Two of the best examples of this are modern-day Iran and the Wars of Religion in 16th Century Europe.

First, you have persecution that is driven by the state. Here, national, regional, local governments use their resources to persecute certain religious communities, such as in Saudi Arabia and Myanmar. This can take the form of judicial prosecution, harassment by secret police, excessive fines, regulating printed materials, and so on.

Alternatively, persecution can be driven instead by society. This is where everyday common people, rather than the government, are the primary actors. Pakistan and Nigeria are examples of countries where societal and cultural norms are the biggest factors contributing to persecution. This can take the form of someone threatening to accuse their neighbor of blasphemy to stir up a mob, refusing to sell goods to someone, ostracizing a person from local community life, or harassing another over someone’s beliefs.

Now, countries will often feature attributes of both extremes and fall somewhere in the middle, that’s why these elements are best viewed as spectrums rather than absolute categories. To help visualize how these spectrums interact with one another, look at the chart below. Based on the popular political compass to that’s used to chart political leanings, this is the Martyr’s Compass. 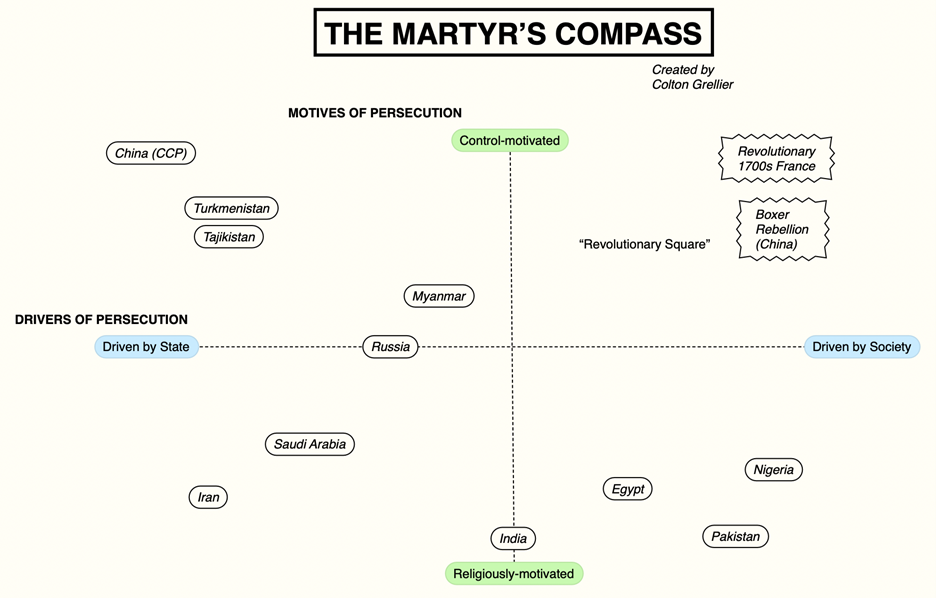 (Quick note: the compass is a tool that is subjective to whoever is using it. Some people may place countries elsewhere on the chart based on their own knowledge. The listed countries are merely those I have previously done research on and felt comfortable enough to list. Also, this chart is not exclusive to measuring Christian persecution but of can be applied to any persecuted worldview.)

Going back to an earlier point, every instance of persecution will have both a unique motivation and a unique driver. With that in mind, a person can use what they know about persecution in a specific country to see where on both spectrums a country will land, thus giving a better understanding of what is actually going on.

This is honestly the beginning of a much larger conversation that needs to be had concerning international religious freedom in the 21st century. For now, my hope for the Martyr’s Compass is that it will bring an appreciation for just how diverse and unique persecution around the world is, and how we must fight it from a deliberate and informed position.

Colton Grellier is a research fellow at ICC who earned his juris doctorate from Liberty University School of Law. Graduating with a specialization in international law, Colton has since worked on and researched religious freedom issues such as the Nigerian Fulani crisis’s effect on women, the legal rights of the Egyptian Coptic Church as concerns places of worship, the role of the IMF and The World Bank in supporting human rights, and creating a comprehensive guide to applying for sanctions against human rights violators under the Global Magnitsky Act.

Violent Threats and Vandalism: An Attack on Pro-Life Organizations

06/28/2022 India (International Christian Concern) – Recently, India’s Supreme Court agreed to hold a hearing concerning escalating attacks against Christians. An Indian Archbishop, the National Solidarity Forum, and the Evangelical Fellowship of India jointly petitioned for the hearing. The court is currently closed for a summer break, but it directed its registry to list the ... More

World’s Top Persecutors of Christians Called Out in Upcoming Report

International Christian Concern is releasing its annual “Persecutor of the Year Awards” report at the International Religious Freedom Summit in Washington D.C. on June 29, 2022. More

Living a Nightmare: Kahindo’s Encounter with the ADF

06/28/2022 DRC (International Christian Concern) – On March 20 of this year, Kahindo, 25, and her two-year-old daughter Nuela were captured from their village by the Allied Democratic Forces (ADF), an Islamic extremist group operating in the Congo. Kahindo and her family are all Christians, as were the majority of people from her village. Following the ... More

Violent Threats and Vandalism: An Attack on Pro-Life Organizations
Increased Hostilities against... more

Has the Roe v. Wade ruling opened a new door of hostility toward Catholics and pregnancy resource centers in the United States?
… See MoreSee Less

Violent Threats and Vandalism: An Attack on Pro-Life Organizations | Persecution

I c no reason for denying the pill

Who are the real fascists here?

When the Gospel is preached and the idolaters repent and follow the truth of Christ, will there be peace? Surely the devil is not pleased with such a thing and will attack the believers through his to persecute.
And persecution is a normal thing believers have to endure from the time of the apostles until the second coming of our God,Jesus Christ.
My prayer is that the believer will have the courage from the Holy Spirit to testify and the idolaters/unbeliever will repent, in Jesus name, amen.

We just dropped our “2022 Persecutor of the Year” report which highlights the worst of the worst persecutors of Christians around the world.

Download your free copy to read more about these dubious “winners” today.

THANK YOU SO MUCH I. C..C OUR POWERFUL LORD JESUSCRISTO ARE BE YOUR GREAT HELP AND TAKE MORE AND MORE FAR FOR THE FINE CRISTIAN PEOPLE GOOD BLES DEERS IS ALL IN THE HOLY NAME OF JESUSCRISTH GOD AND FATHER US…. YOUR S JOSUE DOMENZAIN

We just named the worst persecutors of Christians in 2022.

Find out who made the list by downloading your free report today.