A New Home for Brother Thomas in Vietnam 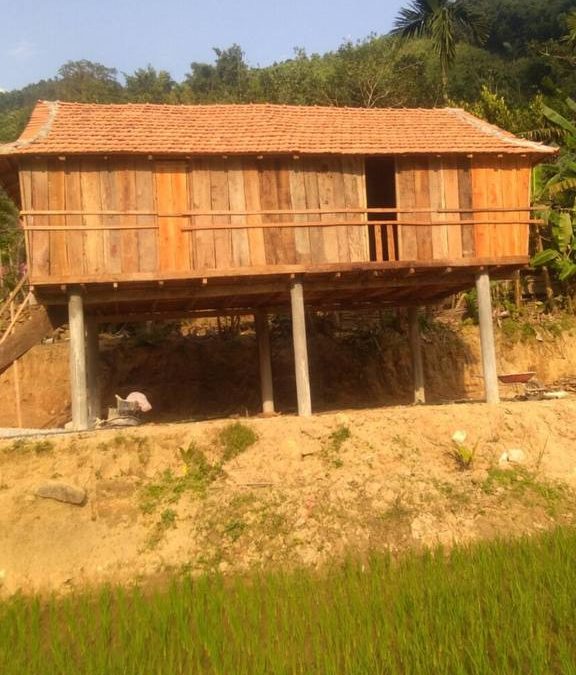 03/15/2022 Washington D.C. (International Christian Concern) – Brother Thomas Don*, his wife, and their five young children have been facing a very challenging situation. They are a poor family from the Kayong tribe in Quang Ngai province who converted to Christianity in June 2021. Although they did not face any objection from their parents for following Jesus, they had to move out from their parent’s house due to their parents’ traditional beliefs. The family of seven resorted to putting up a tent in the land of Thomas’ parents while gradually constructing a house for themselves.

Their first attempt to build a house was stopped by the local government before they could start the construction. They were told that they were not allowed to build a house there. They tried again with another location. They purchased a small piece of land next to their parent’s house and started to build their house on Sept.10, 2021. On Sept. 21, the local authorities came and again stopped the construction, accusing Thomas of building the house at the wrong location. They demanded Thomas demolish and remove his construction, or else they would send people to remove it, and Thomas would have to pay for the labor. At this point, Thomas had already spent all his savings to purchase the land and more than 6 million Vietnamese dong on building the house. The situation really put him over the edge.

His pastor Vinh told ICC, “Since Thomas is not very educated, the government can say whatever they want. If they stopped Thomas’ construction and demanded him to remove the house for that reason, more than half of the families in this village would have to do the same. The real reason is that he converted to Christianity, which they did not want to see happen in their village.”

Pastor Vinh continues, “A cadastral officer who came to Thomas’ house that day told him that he will never be allowed to build his house in this area, that he should go to where his “Tin Lanh” (his Christian faith) exists to build his house. It burdens my heart. I have contacted many places in the provincial government, but there has been no response yet. I will keep fighting for my sheep because the rainy season is coming, and they will not survive in that tent.”

Thomas was later invited to the police office, and they did threaten him. Even though they are new to their faith, thanks are to God that they are standing very firm. Pastor Vinh shared with ICC that he was so worried that they might give up their faith after this episode, so he called them to encourage them. To his surprise, they said that they were willing to die and would not give up their faith. Tho still went to church even though he had to pass by the police officer on his way to church.

In order to provide Thomas and his family with a safe and permanent place to live, ICC stepped in to cover food expenses for three months and assist with the cost of building a house at another location. Pastor Vinh and several Christian brothers helped Tho work on that plan and identify a suitable location.

After a few months of effort, brother Thomas was able to finish the construction and no longer needed to dwell in a tent.

According to Pastor Vinh, the family is so happy and encouraged to see how God is taking care of them in their difficult situation. He said, “Thomas is very simple but very firm in his new faith. He said that God had saved him and his family, and he would never give up. I am so happy for them. Thank you very much to all the donors who show generosity to us. God is using you to build up His church here. We are encouraged to see that He is still working with us. Thank you very much!”