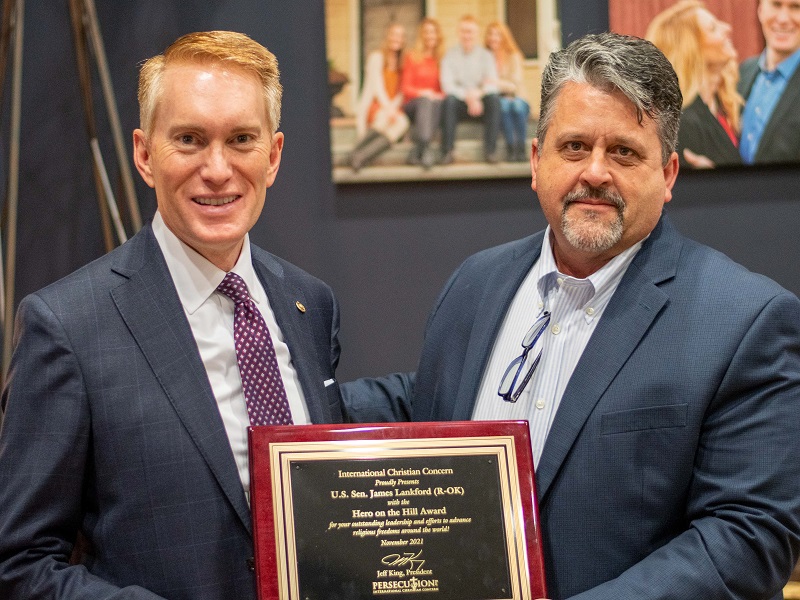 02/26/2022 Washington D.C. (International Christian Concern) – ICC President Jeff King honored U.S. Senator James Lankford (R-OK) with the Hero on the Hill Award last fall for the senator’s global efforts to defend religious freedom. Lankford has been a champion for faith and a friend to the persecuted.

King presented the award to Lankford, an outspoken advocate for persecuted communities and the first Senate recipient of the distinguished award.

While ICC works in trouble spots like Nigeria to help persecuted Christians, its 10 Washington, D.C. analysts educate and advise U.S. government leaders on persecution issues. In turn, stakeholders like Lankford use the power and influence of the U.S. government to pressure foreign leaders to respect religious freedom and hold violators accountable.

Allies like Lankford are crucial to ICC’s mission to relieve the suffering of the worldwide persecuted Church.

“ICC is grateful to have Senator Lankford as a long-term ally in Congress,” said King. “The senator has a passion for helping persecuted Christians and has been a leader in Congress for advancing religious freedoms around the globe. We hope to see more members of Congress follow suit and hold leaders of oppressive regimes accountable for their crimes.”

Lankford pushed legislation and supported initiatives to advance religious freedom as a fundamental right and spearheaded bills to hold Iran and China accountable for their abuses of minority religious communities. He also co-chaired this year’s International Religious Freedom Summit, which brought together members of different faith communities to address rising persecution worldwide. Lankford introduced a resolution to call for the global repeal of blasphemy, heresy, and apostasy laws, passed unanimously last year.

“In our nation, we have the right to have a faith, live that faith, and change our faith without persecution from our government,” said Lankford. “We should stand up for the rights of any person in any nation to also live their faith, change their faith, or to have no faith. Nations with blasphemy, heresy, and apostasy laws that persecute people of faith must end.”

Lankford served four years in the U.S. House of Representatives for central Oklahoma until his election to the U.S. Senate in 2014. Before his stint in Congress, Lankford served students and families for more than 20 years in ministry, including 15 years as the Director of Student Ministry for the Baptist Convention of Oklahoma and Director of the Falls Creek Youth Camp.

ICC will continue to work with Lankford and congressional leaders in combating the persecution of Christians throughout the world.