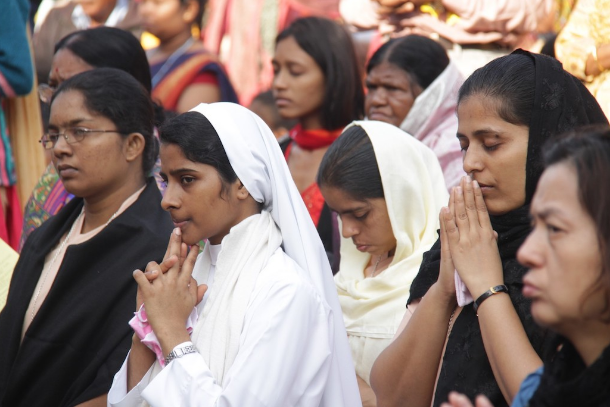 02/25/2022 India (International Christian Concern) – Catholic officials in southern India have started lodging police complaints against various media outlets in response to the trend of denigrating the Catholic Church in their content. Photographers, content creators, and news outlets are slandering priests and nuns and criticizing Catholic practices. The priest secretary of Kerala Catholic Bishops’ Council told UCA News, “Our priests and nuns have lodged more than 160 police complaints across the state against certain online, mainstream and social media platforms for portraying Catholic priests and nuns in a poor light.”

An example of the Indian Catholic community’s complaints was against Photographer Yaami who posted controversial pictures of women in Catholic habits on social media. The photos went viral, and a local news portal quoted the woman photographer: “Two young women in nuns’ clothes hug warmly, walk together hand in hand, and laugh together. The issue is how people look at these photographs.” Church officials said the objectionable photographs were not an isolated case but part of a trend.

An influential YouTuber posted a video that compares the practices of Catholic life and nunneries to an ancient practice where women servants of the gods were sexually exploited by the temple leaders. The YouTuber claims that the male Catholic hierarchy created the nunneries to exploit women and satisfy their sexual urges. The secretary priest responded to this slander by saying, “We cannot tolerate this anymore. We want the government to act against those tarnishing our image as priests and nuns.”

One nun chose to remain anonymous but wanted to remind her community that if the nuns were to abandon their faith and duties, it would be the weakest who would suffer from their absence. If the Catholic community were to dissipate, the thousands of sick and elderly they care for would be cast out into the streets.

According to the priest, south Indian police refused to register their complaints in some cases. Despite pushback from the police, the Catholic Bishops’ Council and church bodies have clarified their stance. “[We will] not succumb to pressure. Our people will lodge as many complaints as possible until the authorities initiate action against those trying to destroy Catholic religious life.”