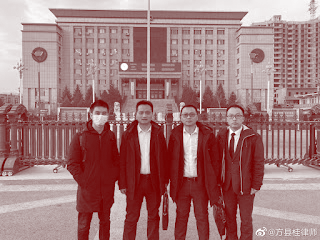 02/15/2022 Washington, D.C. — Four Christians in China’s Inner Mongolia were arrested for selling Bibles. They were accused of “illegal business operations,” a charge that could result in several years of incarceration.

Wang Honglan, 66, her husband, her second son, and daughter-in-law of her eldest son were arrested in April 2021 for selling Bibles. The procuratorate suggested a 15-year sentence for Wang Honglan, since she is listed as the first defendant, and the “illegal profit” she made was more than 40 million RMB ($6.2 million USD).

On Jan. 11, 2022, four Christian lawyers came to Hohhot, the capital of Inner Mongolia, to indicate that they had been commissioned by the four Christians to handle their “illegal business operations” case to Huimin People’s Court. However, the four lawyers were notified that the case would open on Jan. 17.

Given the short turnaround, it would be impossible for Fang Xiangui, Zhu Shujin, Zhao Qingshan, and Yuan Mao to read the 123 files and learn about the case thoroughly in time. They immediately protested to Judge Han Yanjie, hoping that the court would guarantee sufficient time for them to read the materials pursuant to the law.

Judge Han responded that the court had already made all the preparation, including assigning judicial police and arranging court hearings, so she rejected their demand to postpone the trial.

After a long debate with Judge Han and the presiding judge, the four lawyers knew that their request would not be granted. In response, they turned to social media to protest the violation of their lawyer rights by tagging several WeChat accounts belonging to the government.

On Jan. 15, Lawyer Fang shared on his social media, “Thank you all for your prayers and attention. Because the procuratorate has supplied new files, the court has notified us that the trial has been postponed.”

Details of Wang’s case and the trial date have not been revealed. Please continue to pray for Wang Honglan and her family members who are jailed and awaiting trial.

In April 2018, China began banning the sales of Bibles online. Internet users could no longer purchase a Bible at e-commerce sites and had to go to state-sanctioned churches to buy Bibles. Since then, many online sites and apps have been shut down, with Bible sellers arrested and imprisoned.

“The government and most Chinese people ‘perceive Christianity as a foreign religion,’ and see limiting access to Bibles as a way to ‘wipe out Western influence.’”

A Chinese Christian when asked about the crackdown on Bibles.