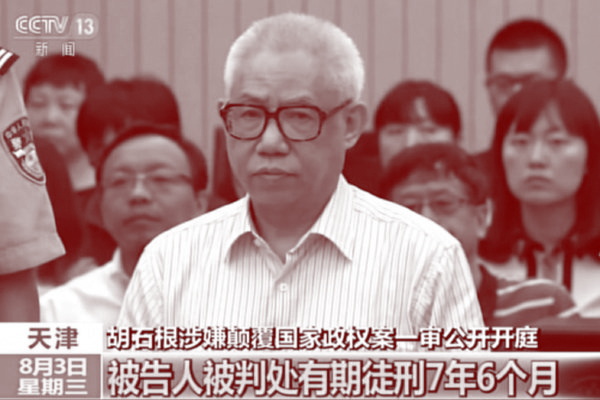 02/13/2022 Washington, D.C. — In 2015, the Chinese government underwent an aggressive campaign to suppress human rights lawyers, activists, and political dissidents. This crackdown led to over 300 lawyers and activists being swept up by Chinese authorities, who would face detention, abuse, and interrogation.

Among them was Elder Hu Shigen, a leader of several house churches in Beijing. Elder Hu, a former democracy activist, was arrested on suspicion of “the subversion of state power” and was later sentenced to seven-and-a-half years imprisonment following a show trial in 2016.

Prior to Elder Hu’s current sentence, he previously spent 16 years in prison for his work promoting democracy in China in the wake of the Tiananmen Square massacre. Elder Hu was a founding member of the China Free Democratic Party and worked to publicize the government’s violent Tiananmen Square crackdown in 1989. While initially sentenced to 20 years in prison, he was released early on account of his poor health, following harsh treatment and torture by the Chinese authorities.

Following his release, Elder Hu took up roles in both the Sheng Ai Fellowship Church and the Yahebo Covenant Church, both unregistered house churches in Beijing. He continued to allow his faith to inform his view on government and continued to speak out for the rights of Chinese citizens and a future peaceful transition to democracy. Regardless of this being the common consensus among most folk in China, his words were quickly vilified by Chinese state media for fear it could fracture the Chinese Communist Party (CCP) itself for its reasonableness.

When the Chinese crackdown detained Elder Hu, nobody in his family was informed of his arrest, as Chinese authorities kept it a secret until January 2016. While in his secret detention, it is alleged that Elder Hu, like several other activists swept up in the campaign, was forced to dismiss his lawyer. The four were then paraded around on televised trials, where each was forced to make a statement pleading guilty – no one tried to appeal.

Many were concerned over the coercion used to produce such unanimous pleas and whether the government planned to uphold its word for medical treatment and medical parole in exchange. However, the government media quickly used them to give credibility to their authoritarian crackdown.

Elder Hu’s family continues to advocate for his release on medical grounds as he continues to suffer from coronary disease. However, the government continued to deny such a request, leaving Elder Hu’s condition in question today.

As Beijing continues to hamper the rights of its people, their voices, and their freedom of religion, pray for those like Elder Hu, who are persecuted for allowing their faith to inspire their fight for justice and for the oppressed in China.

“Speak up for those who cannot speak for themselves, for the rights of all who are destitute. Speak up and judge fairly; defend the rights of the poor and needy.”  Proverbs 31:8-9