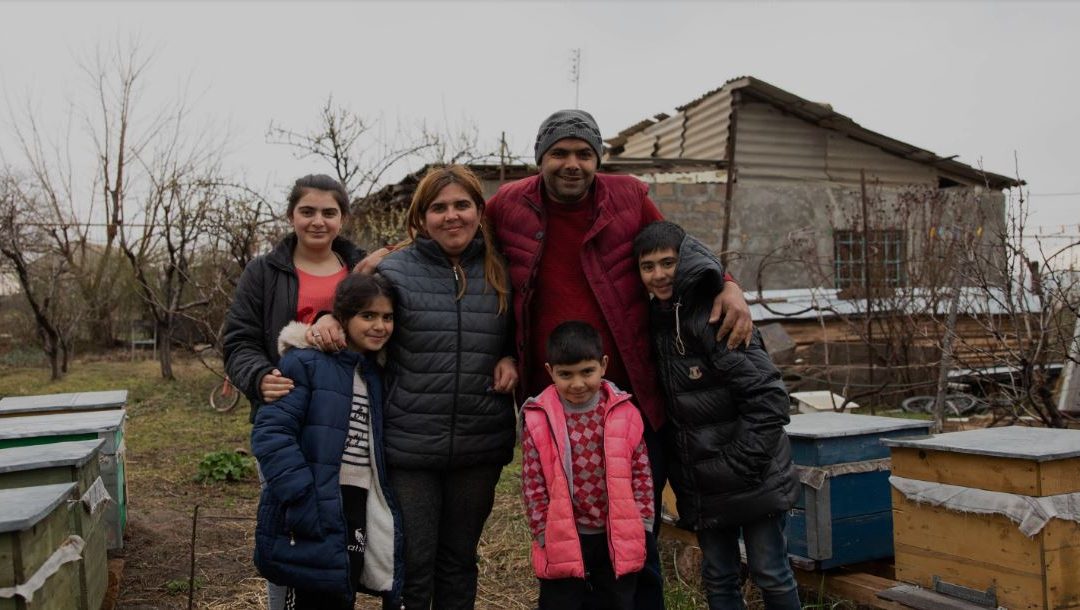 [vc_row][vc_column][vc_custom_heading text=”” use_theme_fonts=”yes”][vc_custom_heading text=”By ICC’s Country Correspondent” font_container=”tag:h6|text_align:left” use_theme_fonts=”yes” css=”.vc_custom_1631202608018{margin-bottom: 22px !important;}”][vc_single_image image=”126871″ img_size=”full” add_caption=”yes” alignment=”center”][vc_column_text]09/12/2021 Washington, D.C. (International Christian Concern) – Mrs. Alvard was the gardener of the only school in the village of Nor Verinshen in Nagorno-Karabakh (Armenian: Artsakh), currently occupied by Azerbaijanis. Her son Robert was on military duty when the war started in late September of 2020. While Robert fought on the frontline against Azerbaijani-Turkish aggression for 44 days, Mrs. Alvard moved with her daughter-in-law, Aregnazan, and six young grandchildren to Armenian territory. This current displacement is the second during her lifetime, with the first was in the late 1980s before the first Artsakh war.

In the beginning, relatives welcomed the family and provided their two-bedroom condo to stay in, along with other displaced family members, totaling 21 people. At that time everyone thought it was temporary, the war will finish in a few days or weeks, and shortly they will move back home. Mrs. Alvard naively recalls counting down the days to get back to her beautiful green garden at peak harvest season.

November 10’s agreement between Armenia and Azerbaijan that ended the war broke all the hopes of family return home permanently. A few days before handing over their district to Azerbaijanis (originally scheduled for November 15, but surrendered on November 25), Aregnazan went back to the village with her husband’s sister where she first visited the graves of her father and sister in the cemetery, likely for the very last time. “I could not bring much of the household items, but I didn’t want to leave the puppy, the ducks, and the chickens behind. I put all of them together in a big rabbit cage and brought them with me,” Aregnazan said.

After 10 months of moving from place to place, the family finally bought their own house with small agricultural land and fruit trees in one of the villages. The Armenian community in the Netherlands and a family from the U.S. contributed the difference sum in addition to Aregnazan and Robert’s savings.

There is still a lot of work to be done to renovate the house. To accommodate their space restrictions, part of the living room has curtains closing off a portion for the children’s room. Their roof is in desperate need of repair. In the future, the adjacent garage could be turned into rooms. They lack several household appliances and electronics, but Aregnazan does not complain. She is happy to have their own place. The family is optimistic and ready to start their new life from scratch.

In their new garden, the beehives are placed at trees. Robert, who was united with his family after the war, says they belong to his friend but together they will share the honey. The family puppy guards the beehives with pride.

“We will do agriculture work. The kids will attend the school. My 14-year-old daughter is happy; finally, she is not going to change the schools (during the last year she changed 4 of them). My 6-year-old son hasn’t gone to school after the war interrupted his first year three weeks class in Artsakh”, says Aregnaz with a sad smile on her face. She often smiles because realizes that her smile also strengthens her children.

Certainly, the family misses and remembers often their old house in Artsakh where they were happy. Aregnazan misses her two pianos she left behind. For years she used to work in the cultural club of their village where they always used to host concerts. All her kids played musical instruments as well. Like a proud mother, she opens her phone and shows the last video of her children play at Dadivank monastery last year. The family never loses hope and still believes and prays that one day they will go back home to Artsakh.