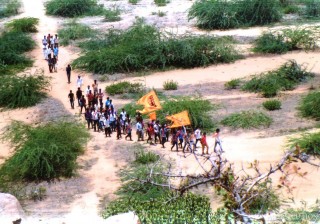 08/31/2021 India (International Christian Concern) –On August 27, 2021, the Bajrangdal and Vishva Hindu Parishad (VHP) gathered together in Kalyanpura village, Jhabua, in the central Indian state of Madhya Pradesh. The primary goal of their meeting was this: make Jhabua a conversion free district.

According to media reports, leaders of the meeting accused Christian missionaries of converting Adivasi (tribal) people to the Christian faith in order to destroy Adivasi culture and tradition. Christians did this, they alleged, by luring in the poor and innocent Adivasi people and forcing them to convert.

Leaders of the two groups then gave an ultimatum to the district administration- either investigate area Churches and missionary work, or they would take matters into their own hands.

The meeting was attended by prominent leaders of the right-wing nationalist organizations, including VHP leader Ajad Premsingh.

A Christian from Jhabua, who requested anonymity, told ICC that “The aggressive activities of the Hindu hard-line groups came to fore, with the enactment of the anti-conversion law beginning of this year.”

“There is fear among the Christian community,” he added. “Several house Churches are being close down out fear and intimidation, the police themselves go around and tell Pastors not to gather for prayers.”

“With the latest Rally in the district… and the announcement of their intention to close down all of the house Churches…it is really concerning.”

Following the meeting, the entire committee partook in a motorbike rally, chanting and holding anti-Christian slogans.

Please pray, as this trend is very concerning for the Christians of Jhabua district and for the state of Madhya Pradesh as a whole.