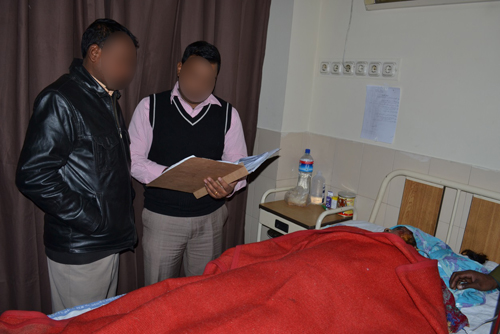 The victim’s sister, Raja Davabi, told ICC that the incident occurred  at 6:30am, when Nitish left the house to go to market. Almost immediately after leaving, Nitish was carried back into their home by multiple people, screaming, with burns all over his body.

“It was a horrifying scene of my brother,” said Raja, “I started yelling and crying looking at my brother. He was in terrible pain at that  point and all that I could do is to share the pain by wrapping him in my hands.”

With the help of the local Pastor, Nitish was rushed to the nearby clinic where he received first aid treatment before being sent to a specialized burn unit in Patna, India.

While the motivation for the attack is yet be known, the Christian community suspects that it is the work of anti-Christian activists in the village. Both Nitish Kumar, the victim, and his brother, Sanjith Kumar, are active in the church and conduct daily prayer gatherings.

The victim’s father, Bhakil Das, explained to ICC that his family converted to Christianity two years ago after being delivered from an evil spirit. His sons, Sanjith Kumar and Nitish Kuma, became active leaders in the local church and led fellowship in their house, where nearly 25 people regularly attended prayer.

Bhakil broke into tears while speaking to ICC. He said, “I don’t understand why this happened to my son and who might have done it, we didn’t do any harm to anybody in our village or anywhere else. My heart pains when I see my son.”

Please pray for Nitish Kumar, that the lord would bring him complete healing and peace during this difficult time. Please also pray for his family, as well as for all of the families of those who have suffered acid attacks and other acts of violence. Lastly, please pray for those who persecute the church, that they would experience the true healing and joy that comes with accepting Jesus as Lord.