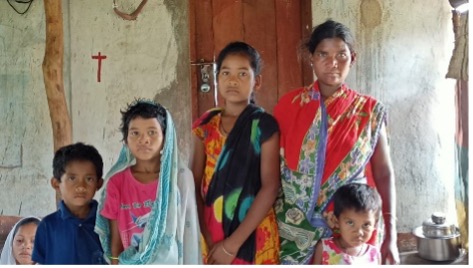 08/20/2021 India (International Christian Concern) – Debe Kartami’s husband died from a snake bite in 2019, leaving her to care for their four children. In 2021, Debe became sick with a blood disease and performed several animal sacrifices for healing per Hindu custom. When this didn’t work, Debe was admitted to Malkangiri Government hospital. The doctor told her that nothing could be done and sent her home.

A few days after being back home, Debe met a Christian from Akarapali village who told her about a pastor named Erma Souti, who could pray for her healing. Debe journeyed to see the pastor, who upon seeing her condition told Debe to stay for a week of prayer. By the grace of God, Debe was completely healed and on May 4th, 2021, returned to her village as a healthy Christian woman.

The evening that she returned home, Debe’s brother-in-law gathered a few of the villagers and went to her house to see where she had been. When she told them what had happened, they became angry and beat her for honoring a religion other than Hinduism. They then forced Debe and her four children out of the village without allowing them to take any of their belongings.

With great pain in her heart, Debe Kartami went away with her 4 children and sought help from the Christian who originally had told her about the pastor. When the Hindu villagers came to know that Debe had gone to the Christian’s house, they showed up at his door and harassed him for providing shelter to Debe and her children.

Again, Debe left Arakapali village and went to Dadigud village where another Christian took her and her family in. On May 18th, Debe filed an FIR report with the Malkangiri police station, detailing the events that lead to her displacement. Due to the Covid-19 pandemic her case was not taken, and when Debe tried to file again, the police would not hear her plea. Today, Bede and her children remain dependent on fellow Christians to house them. Debe says that her only hope is God, and that she aims to live and serve Jesus Christ until her last breath.