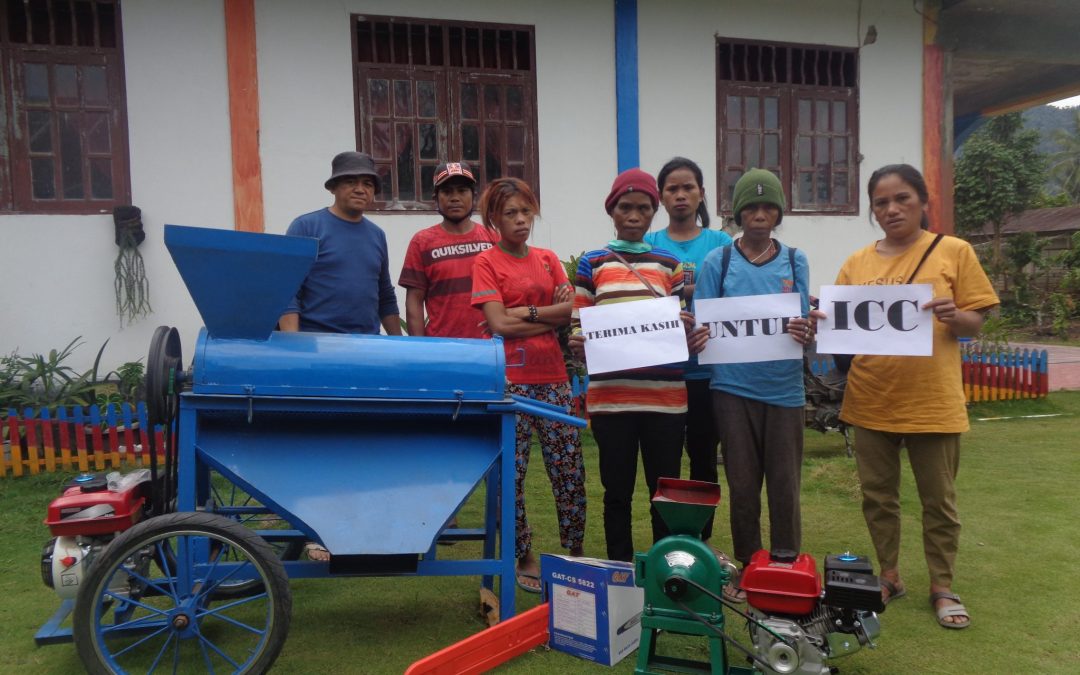 05/24/2021 Indonesia (International Christian Concern) – In mid-March, ICC visited Lembantongoa Village in the Sigi Regency in Central Sulawesi, Indonesia for the second time. This village is the closest village to Lewonu hamlet, a site of a brutal attack by MIT terrorists against the Christian community last November. Four people died tragically, several houses were burned down, along with a post of the Salvation Army Church.

There are 13 families living in Lewonu hamlet. After the attack, due to security concerns, these families have been relocated by the local government to Lembantongoa village. Various non-governmental organizations, individuals, and government agencies under the coordination of the Salvation Army Church, provided housing facilities to these families. On March 25, 2021, the Head of Sigi Regent held a handover ceremony of the housing to these villagers.

ICC, on the other hand, distributed assistance to the community in the form of machineries: a coffee grinder, a corn crusher, and one chainsaw. These tools are needed by the community since they work as corn and coffee farmers. These machineries were burned down along with the houses during the attack.

The corn milling machine and chainsaw were in Sergeant Dewi’s house when they were torched along with the church next door, while the coffee mill machine was in Naka’s house. Naka was one of the victims who was brutally murdered along with his son Pedi. All the victims were members of the Salvation Army church.

ICC noted the conditions of these machineries when the team first arrived a week after the tragedy took place in Lembantongoa. ICC also visited the scene of the incident in the hamlet of Lewonu. ICC staff empathized with the situation experienced by the victims’ families and gave love offering to Lieutenant Arnianto Papa, the pastor of the Lembantongoa Corps Salvation Army Church.

ICC collaborated with PGLII (Fellowship of Churches and Indonesian Evangelical Institutions) to deliver these machineries. PGLII also facilitated ICC’s entry to the village and has been helpful in the arrangement of both trips.

Lieutenant Arnianto Papa who received the machineries on behalf of his congregants, said; “I represent the Lord’s congregation. We are very grateful for the help from ICC, which today God’s congregation in this place receives chainsaw, corn thresher machine, as well as a coffee grinder. We are very grateful for the assistance given. I hope that what we have received can be used for the congregation of God here. There is nothing greater we can say than thanks to ICC.”

Also representing victims who experienced the immediate impact of the attack, Winston Tado, whose house caught on fire along with the church next to his house, said, “The machineries that we received will be used for the needs of our community as before. We are grateful because the machineries we received are very good quality, far better than what we had before. Hopefully, it can be useful for our community here and also for all people in Lembantongoa village.”

And PS. Yewin Chandra, Chairman of PGLII Palu, Central Sulawesi, showed his appreciation to ICC for taking care of what others have not taken care of. Yewin said, “What ICC did – providing assistance in the form of machineries for use by Christian community in Lewono hamlet – is something that is right on target, because this has gone unnoticed by those who provide assistance to victims. With these machineries, the people of Lewonu hamlet can return to restore their lives as coffee and corn farmers.”