The Fruit of a Lifelong Commitment to Christ 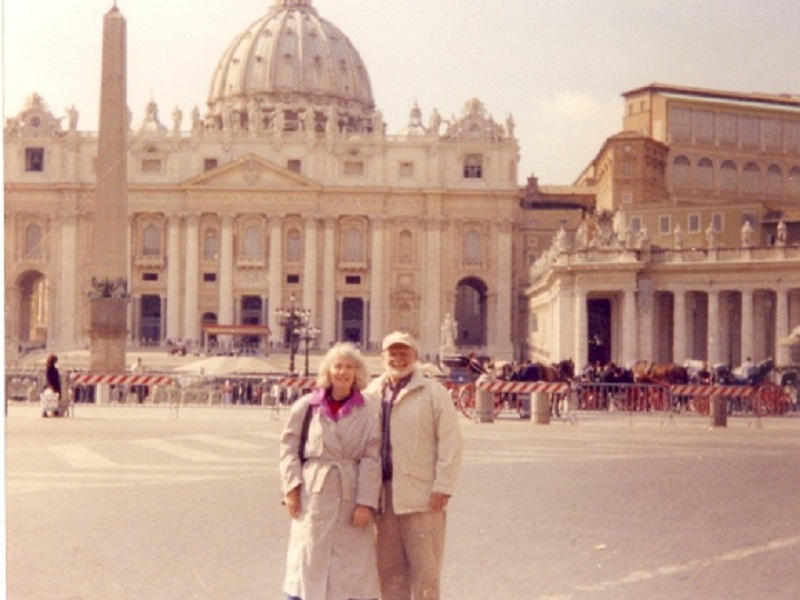 [vc_row][vc_column][vc_custom_heading text=”” use_theme_fonts=”yes”][vc_single_image image=”123996″ img_size=”full” add_caption=”yes” alignment=”center”][vc_column_text]05/08/2021 Washington D.C. (International Christian Concern) – Frank and Joan Testa have displayed a generous hearth through a lifetime of service to the Lord and to their community.

“We had a heart for the poor and for those who suffer injustice,” said Frank. “When we learned of the persecuted, we said to the Holy Spirit, ‘We want the reality of Hebrews 13:3 in our lives. We want our hearts and minds to be so affected that we would stand with the persecuted.’”

And that’s what the Lord did in their lives. He gave them a deeply-seated passion for the persecuted.

“We can read about the persecuted, but to connect with them very intimately, it takes the Holy Spirit, we believe,” said Frank.

For over 13 years, Frank was a Catholic priest. When he was a teenager, he was reading a book about a man going to the electric chair.

“I said, ‘Lord, what would happen to me if I was like that man going to the electric chair?’ The spirit of God came on me and I repented of my sins, committed my life to Jesus,” recalled Frank of when he encountered Jesus.

After the Lord exposed a scandal in the parish affecting the priests, they left the Catholic Church and started attending a Pentecostal church. After two years, the Lord drew them together and brought them to marriage in 1980.

“Joan and I had wonderful years of marriage—40 and a half years of marriage— till last August when Jesus took her home. It’s been a real challenge for me, but I have victory in my life and a peace and excitement about what the Lord’s going to do next with me.”

Frank and Joan spent the latter half of their life together doing church missions and street preaching in the projects. “We had an exciting time then and we were very happy. We never came from that kind of life, but the Lord gave us the favor. People who don’t have any background, if God sends you to do it, anoints you to do it, you can do it,” said Frank. “And we did it. We saw miracles. Men who had done everything under the sun, including murder.”

After 10 years of residential ministry, Frank and Joan began praying for a place out in the country, so that their men wouldn’t be able to walk out the door of the program, jump on a bus, and go back to their former lives.

“We prayed about it and, sure enough, they opened up this house here in Pennsylvania. And that’s what had been our life,” said Frank.

Along the way, they got involved in Harbinger’s Bible and Missionary Training Institute. Teresa, a former nun who served alongside Frank and Joan in the Catholic Church, spent 18 years founding the institute in Kenya.

The Blessing of a Burdened Heart

After a few more connections, the Lord put the burden of the persecuted on their hearts.

“The Word of God says very clearly that we are connected with believers all over the world. They are our brothers and sisters in the Body of Christ and there should be no division. We need to know who they are; we need to know what they go through. If one suffers, we all suffer, the Word says,” Frank explained.

The Lord holds us accountable. Proverbs 28:27 says, “Those who give to the poor will lack nothing, but those who close their eyes to them receive many curses.” Frank and Joan understood this tie of urgency and accountability intimately.

“There’s no excuse. We know there are persecuted believers, and if we don’t do anything about coming to know about them and to know their sufferings and to come to their help and to their aid, we will be held accountable on the day of judgement for that,” Frank said. “God holds us accountable for how we embrace the persecuted and there will be no excuse.”

Jesus says that unless you lose your life, you will not find it. The Testas saw this in their ministry working with drug addicts.

“The root of addiction is self. To get saved, we need to give up self and commit our lives to Jesus. We’re not on our own anymore,” said Frank as he reflected upon the lessons he’s learned. “When we come into the agenda of Jesus, we come into a life that is not [bound] in self, but is embracing the Lord’s program, the Lord’s agenda, and to connect with his whole Body.”

Those who are ready to die for Jesus live lives of faith in their most wonderful, awesome, and beautiful form. We ought to live in this world, ready to give up the grasp on our life on command.

Frank concluded, “We learn from the persecuted how to live a selfless life and to come to a life of faith, which is the most precious life that can be found on the earth— [the] life of those facing persecution, yet holding onto Jesus.”