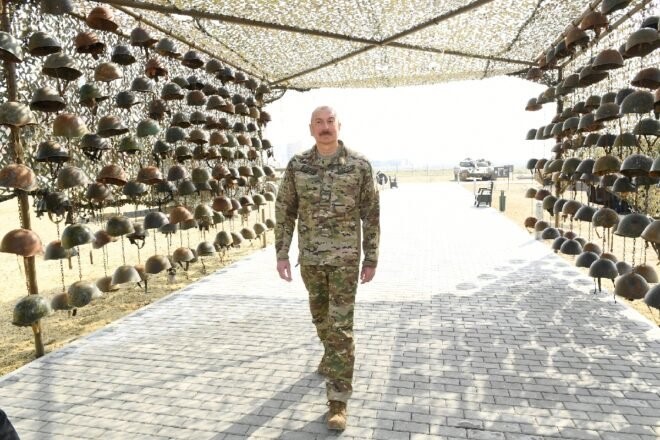 The date of this inauguration was conducted in parallel to the beginning of Ramadan, a soft nod towards the religious freedom issues underscoring the 44-Day War. Nagorno-Karabakh is a predominately Armenian-Christian country. Multiple crimes towards Christians and Christian heritage sites were documented throughout the war. These crimes quite often involved the Grey Wolves, a Turkish ultra-nationalist extremist group.

According to Azerbaijani press, “Military Trophy Park displays Armenian military equipment taken as a trophy during the war… around 300 exhibits, including 150 heavy equipment, tanks, combat vehicles, artillery, anti-craft missile systems, small arms, military transport are on display in the park… Among the exhibits is the composition that reads ‘Karabakh is Azerbaijan!’ and made of license plates of more than 2,000 cars. The license plates had earlier been displayed during the Victory Parade held in Baku on December 10.”

State media photos show several concerning components of this event and the park. President Aliyev is wearing his combat military uniform during the park’s inauguration, further emphasizing the continued posture of war and conquest towards the Armenian community. Other alarming elements include displaying the helmets of Armenians killed during the conflict, as well as creating cartoonist wax mannequins of servicemen stylized in a way that reinforces degrading stereotypes of Armenian Christians. Additionally, many of these mannequins show these servicemen as either dead or dying.

Gegham Stepanyan, the Human Rights Defender of Artsakh, posted on Facebook, “In all this, not so much the absolute disrespect of the dictator of Azerbaijan for humanity, but the indifference and tolerance of civilized humanity is surprising. In front of the whole world, Ilham Aliev with fascist cynicism publicly insults, humiliates the dignity of an entire nation, and deliberately inflicts suffering on the relatives of the dead soldiers, missing people, and prisoners of war. Instead of condolences and shouting about the universality of human rights, the international community must properly assess the atrocities committed by Azerbaijan and hold it accountable for its crimes against humanity committed during the 44-day war.”

The military victory claimed by Azerbaijan over Nagorno-Karabakh is also a military victory claimed by Turkey, who provided support through the provision of weapons, training, and Syrian mercenaries. The Turkish government has also memorialized their role by releasing a report which attempts to discredit the victims, rewrite the narrative of what happened, and silence those who dissent. Turkey’s President Erdogan was also present during the Victory Parade held in Baku this past December.

For more information regarding the war, including how Azerbaijan and Turkey abused their position of power, ICC has published the report The Anatomy of Genocide: Karabakh’s Forty-Four Day War.

Claire Evans, ICC’s Regional Manager for the Middle East, said, “Inaugurating this kind of park is incredibly distasteful. Let us be clear: this is not a war museum. It is one thing to respectfully document the horrors of war as a way of showing why such a tragedy should not be repeated. The purpose of a war museum is the promotion of peace and reconciliation by acknowledging history, including any crimes committed by the winner’s side. It is another thing entirely to create a trophy park of a military victory, and to display the losing side in such a degrading manner. The posture taken by Azerbaijan towards Armenians is a posture facilitated and encouraged by Turkey. It is a posture of violence and genocide towards ethnic Christians. The international community should not be silent, such actions are the foundation from which other human rights violations flow.”