A Lust for Jihad 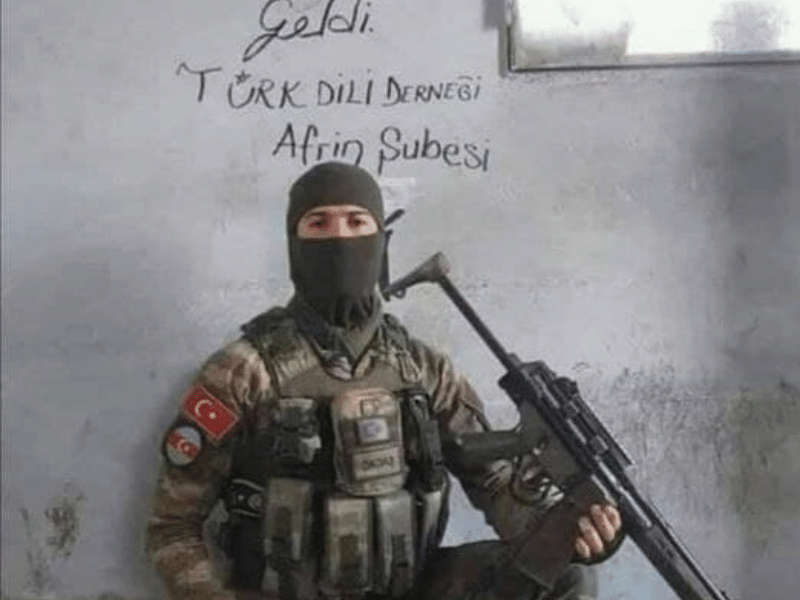 [vc_row][vc_column][vc_custom_heading text=”Erdoğan is happy to attack Christians in neighboring countries. Jihad is his love and regional supremacy is his goal.” use_theme_fonts=”yes”][vc_single_image image=”123615″ img_size=”full” add_caption=”yes” alignment=”center”][vc_column_text]This story was originally published in the April issue of ICC’s Persecution magazine.

04/07/2021 Turkey (International Christian Concern) – It’s on a schedule. Every autumn, Turkey either launches an invasion into Syria or increases their military activities. Syria was once the homeland of many Assyrian and Armenian Christians, but now few remain. For those who have chosen to stay, Turkey’s activities bring fresh pain.

Today, Turkey has been making strategic military moves in Syria, Iraq, Artsakh and other locations, specifically targeting Christians in order to destroy their lives, their homes, and their chance at rehabilitation.

Invading Syria with Terrorists
Last year, something was different in Syria. Chatter filled the ranks of the terrorists hired by Turkey that they would soon be sent to Artsakh, a territory claimed by Azerbaijan but historically inhabited by Armenian Christians. Turkey made it clear that this upcoming invasion was for religious reasons. “Because it is part of the Jihad; it is a holy war of Muslims against Christians,” explained one Syrian terrorist to the media.

One Syrian Armenian woman who stayed shared, “I was taught [about] what happened to my ancestors, what they have been facing. This made me hold onto my Christian faith. They lost their lives for not accepting to give up on Christianity for the sake of Islam. This made me hold on more because their blood should not go to waste. I always think of the strength of faith they had and I wish I could reach that faith level.”

She watched as Turkey terrorized Syria and recruited from the ranks of terrorists such as ISIS. As she reflected on the repetition of history, she shared, “The Turkish government was and still is pretending secularism-one of the Ottomans faces-with their expanding greed. The previously mentioned is still occupying parts of nearby countries and is seeking for more,” she adds.

Thousands of Syrian terrorists flooded into Artsakh. The local Armenian community stood no chance as these mercenaries joined Turkey and Azerbaijan in capturing large swaths of territory, displacing tens of thousands. Artsakh’s Armenians stood no chance.

Today, the damage is profound. Relatives remain missing, presumed captured or dead. Homes and Christian sites are completely destroyed. Some of the displaced are trying to return home if their city escaped capture by Azerbaijan, but the obstacles of successfully returning are substantial.

History Repeats Itself
Unfortunately, it is a story of repeated genocide that was freshly experienced by Iraq’s Assyrian Christian community. The genocide of ISIS from 2014-2017 displaced them from home, leaving behind destruction that will take years to rebuild. But while this ISIS genocide was ongoing, Turkey began quietly establishing themselves in Northern Iraq.

“Over [its] history, Turkey expanded… through invading areas, making people living uncomfortably for a long time, [until] part of the community leaves,” said one Christian from a targeted area.

Another explained, “Our family were victims of genocide against Assyrian Christians under the Ottoman government. Still, we suffer because of Turkish attacks… [We are afraid of] Turkish forces because they bring with them Muslim radical fighters like Mohammed’s force. These militias are so radical and their ideology is same as ISIS.”

Syria, Iraq, and Artsakh are but a handful of countries where Turkey is pursuing expansionism, with Christians being specifically targeted. President Erdoğan has made it clear that he desires the recreation of the Ottoman Empire, and is expanding Turkey’s influence in those countries once under Ottoman control. Meanwhile anyone who speaks of the historic genocide does so at the risk of harassment or even imprisonment.

Silencing these voices gives strength to Turkey’s current activities. It ensures that the genocide can continue, but this time on a global scale.[/vc_column_text][vc_column_text css=”.vc_custom_1612365598089{margin-bottom: 0px !important;}”]