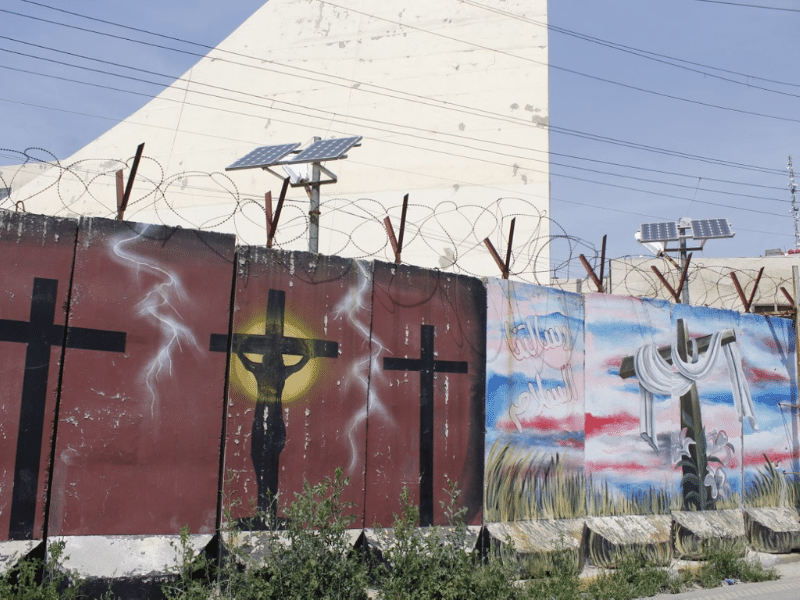 [vc_row][vc_column][vc_custom_heading text=”Pope Francis seeks to promote relations among Christians and Muslims in the region, as well as visit key villages in the Nineveh Plains where a majority of civilians fled.” use_theme_fonts=”yes”][vc_custom_heading text=” ” font_container=”tag:h6|text_align:left” use_theme_fonts=”yes” css=”.vc_custom_1614950641971{margin-bottom: 22px !important;}”][vc_single_image image=”122957″ img_size=”full” add_caption=”yes” alignment=”center”][vc_column_text]03/05/2021 Washington, D.C. (International Christian Concern) – A little over a decade has passed as worshippers of Our Lady of Salvation Church in Baghdad, Iraq continue to heal from the trauma they endured. On October 31, 2010, Al-Qaeda suicide bombers unexpectedly stormed a peaceful Sunday service, aimlessly targeting the congregants. Among the dead lay priests, men, women, and children.

For the churchgoers, this attack left an unforgettable scar. Many members are familiar with one another, whether they be family or neighbors. Rafah Butros, a survivor of the attack, lost her cousin, a 27-year-old priest. She had not stepped foot in a church for nearly three years. Before his passing, her cousin told her if she keeps up this behavior, they will never speak again. Since the incident, the church has become her second home. In a CNN article, Butros said, “I am attached to this place. Every other day I come here. I feel like my soul is in this place with them.”

As devastating as it was, this disaster did not hold worshippers back, as they continue to conduct mass and celebrate holidays regularly. The Christian community has eagerly been awaiting this month since the Vatican announced Pope Francis’ Iraq visit. During his visit, he will meet with Shiite leader Ali al-Sistani and visit Christian villages that were decimated after ISIS, including the Nineveh Plains, Qaraqosh and Mosul.

Pope Francis seeks to promote relations among Christians and Muslims in the region, as well as visit key villages in the Nineveh Plains where a majority of civilians fled. The majority of Christians in the Nineveh Plains are indigenous Assyrians. However, very few Assyrian Christians are able to live in their villages, as the impacts of ISIS and the warfare between Turkish forces and the Kurdistan Workers’ Party (PKK) continues to displace civilians. The Iraqi government, alongside the KRG, provides little security for the villagers in the region.

Attendees of Our Lady of Salvation Church anxiously await the Pope’s arrival. One choir member told ICC, “the church has since healed from the tragedy of 2010. We hope Pope Francis has a safe arrival and departure. I pray his visit will help Christians live peacefully in Iraq.” The choir member informed ICC that church members, along with the clergy, make preparations every day for the Pope’s arrival. The congregation hopes the Pope’s visit will shed more light on Christianity in Iraq, and possibly give Christians more political clout in the government. The choir member remains optimistic, though not many Assyrians share her view.

The attack shook many Assyrians to the core. Some permanently left the region for a more secure lifestyle. Among the few who left is an Assyrian now residing in the United States. The emigrant shared their personal experience of living in Iraq with ICC saying, “growing up, I did experience a lot of discrimination for being Christian. It was so difficult living in Iraq. If you are Christian, you cannot do anything without worrying.” A few years after the devastation at Our Lady of Salvation, their family left with only the essential documents and resettled in America.

Looking externally now, the family is concerned about the future of Christianity in Iraq. One family member shared, “I witnessed a lot of terrible attacks on Christians. One of my friends was killed for his faith. There was never peace in Iraq for Christians and I don’t see a bright future for them.” Now living in the United States, they attend service regularly and without worry, but keep the Assyrian-Iraqi activists in their prayers.

The number of Assyrians in Iraq dwindled significantly in recent years. The activists who refuse to allow the Christian heritage be erased from Iraq remain hopeful that one day they will exercise the freedom to practice their religion without threat. A Christian Iraqi villager named Raja said to ICC, “I hope that Iraq will someday become a safe country, allowing the expatriates to return and allowing us to be reunited within the same homeland.” The indigenous community has shown immense resilience, never denying their faith, despite the endless trauma they endure.[/vc_column_text][vc_column_text css=”.vc_custom_1614863924110{margin-bottom: 0px !important;}”]