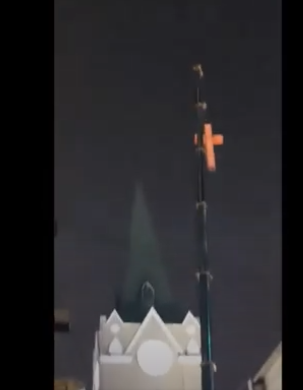 01/18/2021 China (International Christian Concern) – On January 16, the cross of a state-sanctioned Three-Self church in China’s Zhejiang province was forcibly removed.

According to the information shared by Father Francis Liu of the Chinese Christian Fellowship of Righteousness, Yongzhong Street Canghe Church in Wenzhou city had its cross forcibly removed by local authorities on Saturday.

The church soon filed a police report to inquire about the “stolen cross.” However, the Public Security Bureau in Wenzhou’s Longwan District, responded with an official document which claimed the stolen cross case does not fall under public security bureau’s jurisdiction and will not be processed.

Meanwhile, another Three-Self church nearby, Yongzhong Christian Church, also had its cross taken down by local authorities.

Wenzhou city has one of the highest Christian population density in China. In 2013-2014, the Zhejiang government instituted a cross removal campaign and removed thousands of crosses from Wenzhou and nearby cities. It is worrisome that years later, the cross removal continues to be documented across China.