Planting Churches One Bike at a Time 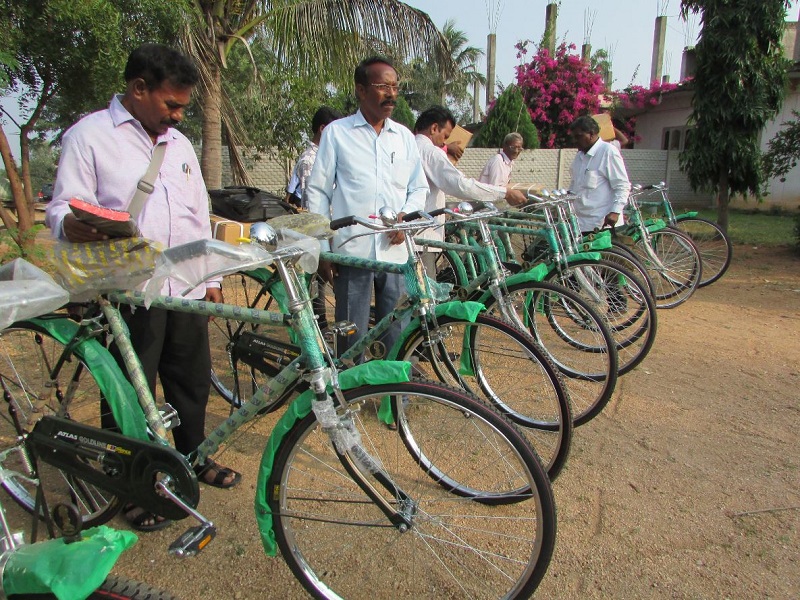 These extremists are emboldened by Modi and his party’s silence and anti-Christian hate speech after attacks. But, through the blood, sweat, and tears of hundreds of pastors and evange­lists, the Gospel continues gaining ground in India.

In November 2018, ICC launched its Bibles and Bikes initiative, an ambitious campaign to bring the Gospel to India’s rural and unreached communities. Through this initiative, we will equip 1,000 rural evangelists with a new bicycle and 100 Bibles each to reach the surrounding areas with the Gospel.

To date, we have empowered 648 rural evangelists from 17 of India’s 28 states, reaching 3,874 previously unreached vil­lages. Even though the COVID-19 lock­down has slowed the implementation of the initiative, ICC is in close contact with these evangelists, providing support and following up on their ministries.

Since receiving his bicycle, Pastor John has traveled to 23 new villages to evan­gelize and distribute Bibles. He has also started three house churches and brought 15 people to Christ.

“I used to go on foot and sometimes used public transport,” Pastor John, a Bibles and Bikes beneficiary, told ICC. “Now I am thankful for the bicycle I received from ICC, which helped [me] to plant more house churches in a short span of time.”

Pastor Prasad has faced opposition from radical Hindu nationalists, but remains committed to reaching the unreached with the bicycle and Scriptures he received from ICC.

Pastor Prasad and his son have been able to visit several new villages to spread the Good News. They have even started a new fellowship in one of these villages, despite initially encountering opposition.

Before the gift of her bike, Sister Divya in Tamil Nadu used unreliable public trans­portation or her own two feet to bring the Gospel to the unreached.

“The bicycle has helped me travel to more villages and share the love of Jesus with those who have not had the chance to hear the Gospel,” Sister Divya told ICC.

With her new bicycle, Sister Divya now ministers to 30 villages. She has been able to establish seven new Christian fellow­ships in just the last three months. Can you imagine the amazing Kingdom impact all these new fellowships are having in the untouchable community?

“I am so thankful to ICC,” Sister Divya said. “The people we are seeing coming to Jesus would not have been possible with­out the Bibles and Bikes initiative.”

According to our beneficiaries, 3,874 rural and previously unreached villages were visited by a Bibles and Bikes evan­gelist. In these villages, 448 new Christian fellowships were started, and 6,084 indi­viduals have accepted Christ as their Lord and Savior.

With the simple tool of a bicycle, pro­vided through the support of ICC’s donors, we hope to continue sharing the Gospel in India. Looking forward, ICC remains com­mitted to empowering rural evangelists. To fulfill our goal, ICC will empower another 352 evangelists in the near future with their own bicycle and 100 Bibles.