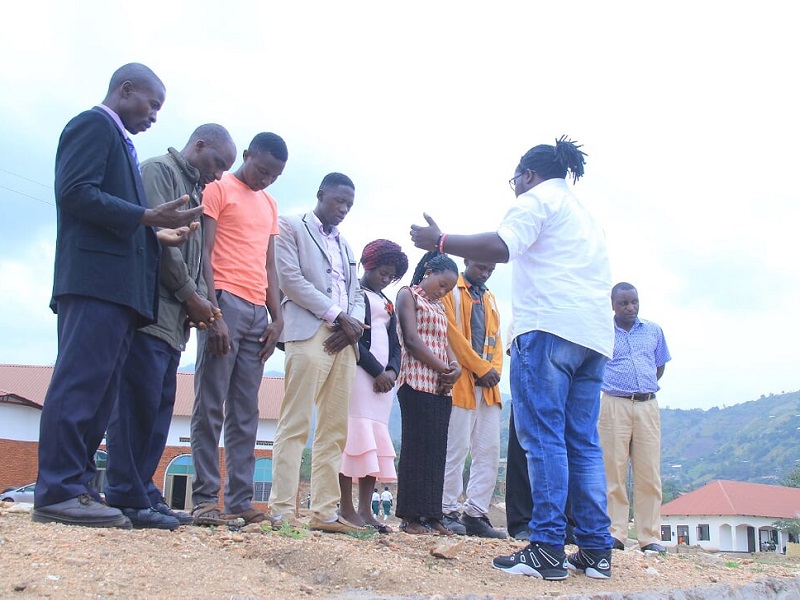 [vc_row][vc_column][vc_custom_heading text=”” use_theme_fonts=”yes”][vc_custom_heading text=”By Meg Midwood” font_container=”tag:h6|text_align:left” use_theme_fonts=”yes” css=”.vc_custom_1590066646343{margin-bottom: 22px !important;}”][vc_single_image image=”116547″ img_size=”full” add_caption=”yes” alignment=”center”][vc_column_text]06/30/2020 Washington D.C. (International Christian Concern) – We were amazed by the tes­timonials of a group of MBBs in Africa, who con­tinue to live in Muslim-dominated communities in order to reach other Muslims with the Good News. We traveled to Africa to meet with three of these evangelists, two of whom are former Muslims. They gave us a firsthand witness of their work with new MBBs, which we now support. Here’s an inside sneak peek of their life and ministry.

A Crusader for Christ

Reverend Musisi worked as an assistant mission coordinator for six years before being sent to a city known for its huge population of Muslims. Islam had spread in the region through promises of wealth and power; in one town alone, there were 33 mosques and 10,000 Muslims. This was the beginning of Musisi’s foray into Muslim evangelism.

In 1994, he held his first crusade. He had no idea what he was getting into, or how powerful the Muslims were in that community.

“When we started, we started ignorantly because we didn’t know how rich the Muslims [were]. I remember [in] 1994 we had the first crusade, and other evangelicals were beaten and then taken to court. But…the case was won in the court.”

He can still remember in 1994, when they prayed with a Muslim man who had a crippled daughter. An amazing thing happened when they prayed. He shared, “We prayed for her, and [his] daughter was delivered, and then she accepted Jesus Christ to be her Lord and savior in the middle of that town.”

They began to lead the new coverts in disci­pleship and their evangelism training exploded.

“We found God in that Church of Uganda,” he shared. “In that town, we have [started] like three parishes and over 20 churches around their mosques. And we thank God for that and [that] we’re reaching them.”

One year, they mobilized a massive crusade with around 10,000 attendees. Musisi was called to the police station three times that week, but nothing happened. The crusade was a success and through it, they were able to start fellowships in the area. One Muslim woman even asked him to pray over her home.

Today, Musisi continues to bravely serve at his parish in a Muslim-dominated area.

Leaving the Results to God

Bwambale’s first religion was Islam. Though his parents were nominal Christians, he never saw them go to church. He decided to convert to Islam because of the social benefits, but in 1985, while reading the Bible in secondary school, he realized that he had made a mistake. Jesus was the only way to God.

At the same time, Pakistani Muslims came to his area, training the Muslim communi­ty to hate Christians. They told them that “Christians are not the right people to live in the world.” Bwambale was told not to share with Christians, not to eat with them, and not to tell them anything about Islam except what would be needed to convert them.

But, as Bwambale heard these words, he thought, “Now, if the Christians are Christians because of Christ, and the Quran is saying Jesus is the straight way, now why should we hate the Christians?” These questions weighed on him, especially because he was being prepared to lead a mosque in the area, though he had not received formal training in Arabic or Islamic teaching.

Eventually, the seed of doubt urged him to reject his future calling. He told the Pakistani Muslims, “No, I can’t continue with Islam, since Islam is hating Christians and then it is Christ who will take people to heaven.” On January 20, 1991, he decided to commit his life fully to Jesus Christ. This commitment cata­pulted him into evangelism ministry.

After his conversion, Bwambale faced per­secution. He shared, “They tried to come and maybe tease me and abuse me, but because I also [know] some verses in the Quran, they feel challenged. So with God’s help and God’s grace, I’m surviving and I have known these tricks.”

“During that time, other fellows came to train us in Muslim evangelism, so I started trying to reach my fellow Muslims. However, it was not easy. They could toss me out. Others could want to fight me because they knew that I was a Muslim before. So, they didn’t want to listen to me. However, some few people who were lis­tening to me, we could continue with them, and I was sharing [the Gospel] with them. Many people, many Muslims, have come to Christ.”

Through his own experiences, he was able to sympathize with new MBBs and encourage them to face persecution.

He shared, “One Muslim by the name of Adeema was a teacher at one of the secondary schools in that area. And I was sharing [the Gospel] with him… He decided that he wanted to become a Christian, but he feared persecu­tion… In 2019, he [shared his faith] openly and he was baptized and also wedded in the church.”

Today, Bwambale is a trained MBB evange­list. He lives by the motive that “it is not us who are making people come to Christ… Success in witnessing is taking the initiative of sharing Christ with the people and leaving the results to God.”

Moses grew up with free access to the Bible and the Quran. His father, a Muslim, married his mother, unaware that she had converted to Christianity before their marriage.

Because of this, when Moses was a young boy, he learned about both religions. He discov­ered that Jesus was the true way for him to have a relationship with God, but his conversion sparked intense persecution from his family.

“I decided to leave Islam to come to Christianity. When I came into Christianity silently, my father [found out]. I was very, very persecuted [by] my family. Then, after being persecuted, I [returned] to Islam. I went back. I was Muslim, but [was] convicted in my heart that Jesus Christ is the only way to God. At the age of 20, I decided fully to convert from Islam.”

Moses’s father denied him his inherited land and banished him from the house, so he left his family empty-handed.

Through circumstances orchestrated by God, Moses met Reverend Muravu, who trained him to be an evangelist to Muslims. He became the lay leader of a parish, where he began to help facilitate new MBBs through the process of adapting to their new life.

Moses was able to lead his brother, an imam, to Christ.

His brother brought with him 42 converts from his mosque. He shared, “One time, we were persecuted by Muslims… They brought spears. They wanted to disorganize our crusade. We told the police. The police came and stood with us. After persecution, [we experienced] restoration. We continued with our crusade.”

But conversion to Christianity often comes with a price tag that new MBBs don’t expect.

When Moses leads Muslims to Christ, they often ask him, “We converted to Christianity, but now we are denied from our family. Now what should we do?”

Through the evangelism program, Moses is able to refer them to another reverend at the church, who teaches them how to walk out their new faith in the midst of adversity.

Today, Moses continues to bring hundreds of Muslims into the fold through his outreach.