Equality Before the Law Merely a Slogan for Indonesian Christians 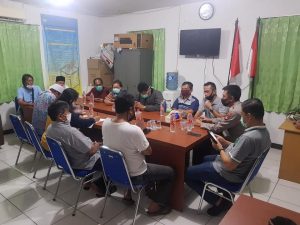 Arion and his family goes through mediation process with the intruders.

05/30/2020 Washington D.C. (International Christian Concern) – Recently, another case of intolerance towards Christians occurred in Cikarang Sub-District, Bekasi Regency, West Java. On April 19, 2020, when a family whose members belong to the Christian Batak Protestant Church (HKBP) was praying at home, the head of the sub-village and a Muslim religious leader named Imam Haji Mulyana barged in. They forced this family to stop their home worship. This incident went viral online, after the homeowner Arion Sihombing uploaded a video documenting the conflict.

Local police denied the allegation that the neighbors’ action was considered religious intolerance.  The dissolution of worship was intended to address the violation of large-scale social restrictions (PSBB). “It had nothing to do with religion. Yesterday’s incident was [actually] the PSBB problem. That’s all,” according to Bekasi Metro Police Chief, Senior Commissioner Hendra Gunawan, as he told detikNews on April 20.

But Arion Sihombing told International Christian Concern (ICC) a different story. He even linked the incident this time with an experience 14 years ago that also took place at his residence. “This is the second time we have experienced an event like this in this place. It happened 14 years ago. At that time, our family had just moved to Rawa Sentul. We held a thanksgiving service as we occupied a new home. This is normal for us, since every time [ethnic] Batak people occupy a new house, they must start with a prayer first, so that we who occupy this house will be blessed,” he shared on a phone to ICC’s Indonesia representative.

He continued, “While our worship was taking place, a mob arrived. They stopped our worship by force, the liturgical paper that guided our worship was thrown away, the Bible was stamped, and my father was taken by them to the police station. After that, along with my father, two messengers came to our home, taking down all the pictures of Jesus and the decor of the cross from the walls of our house. At that time, my father was forced to sign a letter of agreement not to hold any form of worship in our house. But it did not stop there, for a month that followed, our home was terrorized as neighbors threw stones at us every night,” Arion said.

The incident on April 19, 2020, almost made them relive the memory 14 years ago. When they held worship at home, two people descended, one of whom was Imam Haji Mulyana carrying a wood stick in his hand, shouting while demanding them to stop worshipping, so that the same thing would not happen as the event 14 years ago. For Arion, they worshipped at home because they followed a suggestion from the government to worship at home, given the COVID-19 pandemic situation, and all who gathered at his home were only his family members.

Arion considers this case to be a religious intolerance case since a lot of evidence shows that the intruders did so with an intolerant attitude. For instance, the two entered their home without permission while yelling, with one of them carrying a wood stick. Moreover, the one who led the mob 14 years ago was the same person who revisited their home on April 19. “14 years ago, Imam Haji Mulyana led the mass group, and he was the commander of the Islamic Defenders Front (FPI) [a radical Muslim group] at the time, and now he is a member of the Interfaith Harmony Forum (FKUB) [a government-appointed group largely represented by Muslims],” said Arion.

Facilitated by the Bekasi Police Chief, this case led to a statement of peace and forgiveness from both sides and a signature on an agreement with 6000-Rupiah stamps. This is a common custom taken in Indonesia if the two parties in a dispute want to make peace.  However, Arion indicated that “Actually we have no choice, we were directed by the police to take this measure. At first, it was very hard for us to accept this ‘mediation.’ But finally, me and my family were able to accept because we wanted to see what God’s will is for us through this.”

A situation like this unfortunately often occurs in Indonesia. The victims are asked to ‘reconcile’ with the offenders if the former are religious minorities in the country. But the same would not apply otherwise. Several instances best illustrate this double-standard phenomenon. In former Jakarta governor Ahok’s case, as an ethnic Chinese Christian, he quoted Al-Maidah Verse 51 (Q5:51) from the Quran, which has been said to underlie forbidding non-Muslims to become leaders in Islamic countries in his campaign speech. His statement caused an uproar to a group of Muslims, which resulted in his very known blasphemy case. In spite of his apology, he was sentenced to two years in prison.

Meiliana from Tanjung Balai, Medan, an ethnic Chinese housewife who is Buddhist, also received similar treatment. She simply questioned why the volume of prayer from a nearby mosque was so loud, yet she came under attack from Muslims. Despite her apology, the anger of mass spread. As a result, at least three temples, eight pagodas, two Chinese foundations, and Meiliana’s house were attacked by mobsters. She also was subsequently sentenced to one year and six months in prison for blasphemy.

The case of the prohibition of worship against Christian families in Cikarang proves that intolerance is still a problem in Indonesia. This further adds to the long list of intolerant actions by radical Islamic groups, as they seemed to be given the freedom to carry out acts of intimidation against minorities. Law that should function as a means to bring justice became an agent of injustice. There is no equality before the law, even though the 1945 Constitution of Indonesia affirms in chapter 27 verse (1) that “all citizens have equality before the law.”

05/24/2022 Egypt (International Christian Concern) – Egypt’s Christians faced increased levels of persecution during the religious seasons of Easter and Ramadan. The man who killed Coptic Priest Arsanious Wadid was sentenced to death on May 18. Just a few days prior, the man who shot and killed Rani Raafat recently took to social media to brag ... More

As the 2022 Winter Olympics helped to demonstrate, China is notorious for its extreme censorship of online content, particularly any information that criticizes the ruling Chinese Communist Party. More

05/25/2022 Nigeria (International Christian Concern) - On May 20, six Christian-owned homes and seven stores were burned by a mob of Islamic youths in Nigeria’s northern Bauchi state, injuring approximately 20 people. The youth were looking for Rhoda Jatau, a 40-year-old Christian woman who works as a medical staff member. One Muslim man claimed to ... More