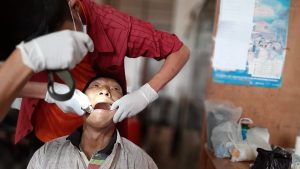 05/07/2020 Washington D.C. (International Christian Concern) – Civil war has torn normal life apart in the borders of Burma for over 60 years.  The sound of mortars is normal and the threat of attack is constant for the ethnic minorities that live on the run from the Burmese Army (Tatmadaw).

The Kachin are a Christian-majority ethnic group residing in northern Myanmar. For many years, they had a ceasefire agreement with the Tatmadaw until it fell apart in 2011 when the latter broke the ceasefire and attacked the Kachin. Fighting has been ongoing since then and tens of thousands of Kachin civilians are currently displaced from their homes, living precarious existences in Internally Displaced Person (IDP) camps or the jungle.

IDPs in these camps fear that COVID-19 will become fast spread given their living conditions. They were hoping for vaccines, facial masks, and awareness to defend against the virus in the camps. They were also concerned about road blockage since rice is typically distributed to them once a month. They wanted to receive rice in advance to last for two months. From March 16-30, the Kachin ranger team from ICC’s partner Free Burma Rangers (FBR) conducted a mission to deliver encouragement, medical care and food distribution to the IDPs.

On this mission, the team served 489 patients, gave medical care to 571 people and extracted teeth of 82 people.

The Good Life Club program was conducted in 9 IDP Camps, where 1,815 students between the aged of 5 to 18 participated in the program and learned about the love of Jesus Christ through songs and interactive activities with the rangers. Soap, lentil, oil, dried fish, garlic and potatoes were distributed to families in one of the IDP camps. Sport equipment like volleyball with net, football, cane-ball with net and racket with net were also distributed in the camps.

A drama about how to be careful not to get infected with COVID-19, teaching everyone to keep their social distance, cover their mouths with something when coughing, clean hands when returning from outside, before meal, or after toilet, and that clothes should be hung dry in the sun, was featured so these IDPs are equipped with basic decease prevention knowledge.

A 72-year-old IDP, Nhkum La, stated his desire to see the end to the armed conflicts. “We want peace. I don’t want to run from here again. No place to run and stay. I can’t run now. I have run four or five times in my life. I’m getting old and can’t even walk much. I pray that I will not have to run from here again.”

An IDP camp teacher also shared how the IDP camps lack resources for the students, from stationaries, drinking water, to cleaning supplies. “We need more donations for those. We would like FBR to come to the camp and raise awareness about basic health and encourage [us] often.”

With your donation to ICC, we were able to serve these vulnerable IDPs in Myanmar, bringing them not only the resources they need, but also the encouragement they so desperately need after living in hopeless situation for years.

05/24/2022 Egypt (International Christian Concern) – Egypt’s Christians faced increased levels of persecution during the religious seasons of Easter and Ramadan. The man who killed Coptic Priest Arsanious Wadid was sentenced to death on May 18. Just a few days prior, the man who shot and killed Rani Raafat recently took to social media to brag ... More

As the 2022 Winter Olympics helped to demonstrate, China is notorious for its extreme censorship of online content, particularly any information that criticizes the ruling Chinese Communist Party. More

05/23/2022 Pakistan (International Christian Concern) – A Christian woman charged with blasphemy nine months ago is still in prison in Pakistan. Last July, she was accused of insulting Islam in a WhatsApp conversation and has been awaiting her trial ever since. The trial is expected to be held today, but these trials have been known ... More