04/30/2020 China (International Christian Concern) – Another church in China’s Anhui province suffered the fate of seeing its cross removed, as China slowly recovers from the COVID-19 pandemic.

As the largest and only church in Hefei city, Hefei Christian Church (HCC) was first founded by American missionaries sent by Disciples of Christ In China in 1896. Its establishment started alongside the medical mission led by Dr. James Butchart.

After rounds of moves and expansion, the church was renovated in April 2006 with the city government’s approval. 14 years later, on April 27, 2020, the cross of this state-sanctioned church was forcibly removed by local authorities.

In a video shared by Father Francis Liu’s tweet, with loudspeaker still promoting virus prevention advices in the background, several workers and cranes can be seen working on the cross removal. At night, as the bright red cross was removed, a woman sobbed while lamenting, “The cross has been taken down, the cross is no more!”

HCC became the second victim of cross removal in Hefei city, after another state-vetted Feixi Sanhe Church’s cross was dismantled on April 15. 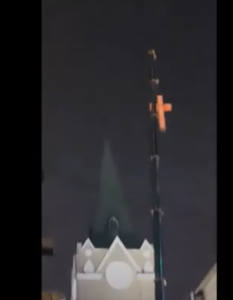 Anhui has seen an increase of cross removal since the beginning of this year. According to China Aid, Secretary of Anhui Provincial Party Committee Li Jinbin stated in February 2019 that “[We] ought to insist on the Sinicization of religion, and holistically prevent hostile forces from infiltrating.” Since then, a church in Funan Country has been dismantled, its pastor and leader criminally detained; churches in Bengbu city and Fuyang city also lost their crosses.