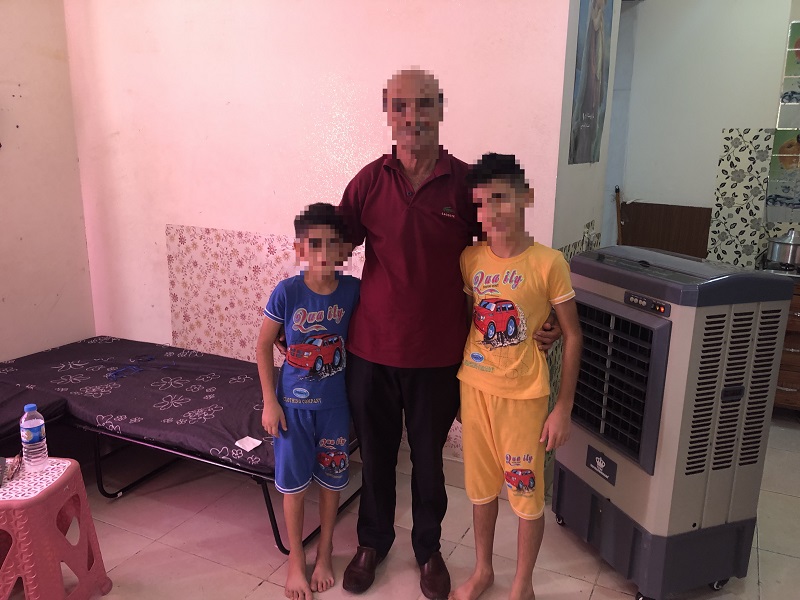 [vc_row][vc_column][vc_custom_heading text=”” use_theme_fonts=”yes”][vc_custom_heading text=”By Claire Evans” font_container=”tag:h6|text_align:left” use_theme_fonts=”yes” css=”.vc_custom_1584367665298{margin-bottom: 22px !important;}”][vc_single_image image=”115254″ img_size=”full” add_caption=”yes” alignment=”center”][vc_column_text]03/16/2020 Washington D.C. (International Christian Concern) – The Clock Church has existed as a distinctive feature of Mosul’s landscape for centuries. Its clock tower marked the passing of time and the continued presence of Christianity in the city. But when the Islamic State (ISIS) invaded and conquered Mosul in 2014, the future of Christianity in the city seemed uncertain. Mosul became the capital of ISIS, and Christians fled the city. As one priest told ICC at the time, “Half of the civilians in Mosul joined ISIS. Christians saw many movies on social media of how civilians welcomed ISIS in June 2014. How can they trust those people anymore?”

The city evolved into the epicenter of ISIS’ genocide against anyone who failed to conform with their strict interpretation of Islam. The militants showed no mercy towards anyone who dissented against their rules. No one was trustworthy. Strict punishments were implemented, and no second chances were given. Many people were tortured, dismembered, and killed in Mosul for their failure to obey ISIS.

Ahmed, a Muslim man who had previously worked as a hotel receptionist, watched alongside his two young boys as ISIS destroyed his home city of Mosul. Life under ISIS was harsh and destructive in every way. “(I’ve) seen people thrown from a tower by ISIS, I’ve seen lots of slaughtering,” he remembers.

“But what shocked me is when ISIS slaughtered a young man who cursed Mohammed, but they released another who cursed God. At this point, I started thinking and asking the question, is Mohammed bigger or greater than God himself? Someone came on his horse with a big sword and slaughtered the young man!!”

The shock of witnessing this event caused Ahmed to wonder who Muslims were really following: man or God. Eventually, Ahmed would abandon Islam. ISIS continued their genocidal activities, destroying all symbols of Christianity. It wasn’t long before they turned their attention towards Mosul’s Clock Church, partially destroying this iconic symbol of Christianity’s presence. Somehow a Bible survived, and Ahmed found it.

The risk of keeping the Bible was significant, but Ahmed decided to study it. He then began secretly streaming Christian media broadcasting at home. He knew that if he was discovered, ISIS would kill him. There was no one left in Mosul that he could ask questions about Christianity. He would come to faith entirely on his own initiative.

When Mosul was liberated from ISIS in 2017, most people living in the city were driven into camps for the internally displaced (IDPs). Ahmed stayed only a few months before attempting to return home. He thought it was safer now to live in Mosul as a Christian. He was wrong.

“When I went back to Mosul, I started talking to my mom as she is old, and I wanted to save her,” explains Ahmed. “That’s how my family knew about my conversion. I stayed at home for almost one year before they kicked me and my sons out after midnight in winter, it was heavily raining.”

Though liberated, no rule of law exists in Mosul. Since ISIS no longer formally existed, his family could not report Ahmed to the formal structure of the Islamic State. But by throwing him out of the house, they ensured exposure to those militants who melted back into society. For this reason, Ahmed again left Mosul with his two sons.

They found shelter in another IDP camp, but danger was everywhere. For his own safety, Ahmed’s family could not know his location. There was a risk that someone from the camp would recognize him and report back to the family. His boys were also Christians, but their youth made it difficult to understand why they couldn’t talk freely about their lives. They were trapped within a ticking time bomb.

Though the pressure was building for Ahmed, the solution was also being crafted. ICC’s field team knew about the situation for Ahmed’s family and was working to find him an opportunity for a better life. A safe housing location was identified in a location far from Mosul. One evening, ICC’s field team drove into the IDP camp where Ahmed was living. That day marked the end of the risky situation Ahmed was facing and opened the door for new opportunities. Our team loaded his meager belongings into a vehicle, and drove the family miles away. A new life began.

For months, ICC’s team supported Ahmed as he reestablished himself in his new location. Challenges remain, but now that he is far away from Mosul, the risk is significantly less and the challenges easier to address. Today, Ahmed boldly proclaims the Gospel whenever the moment presents itself. His children can speak openly about their Christian faith.

ICC’s relocation has given the family something that had never before experienced, something they learned to crave under ISIS: freedom.[/vc_column_text][vc_column_text css=”.vc_custom_1584367819462{margin-bottom: 0px !important;}”]