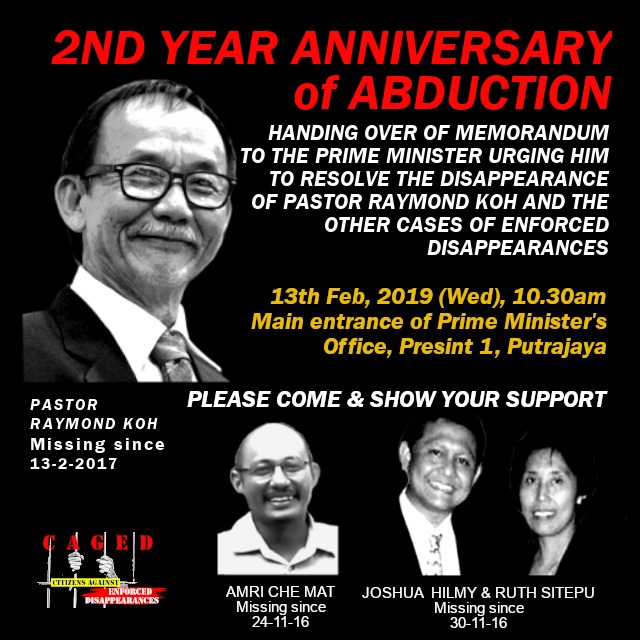 03/02/2020 Malaysia (International Christian Concern) – In the latest hearing held by The Human Rights Commission of Malaysia (Suhakam) for missing Malaysian pastor Joshua Hilmy and his wife Ruth Hilmy (née Sitepu), the landlord of the missing couple testified that a former official had reached out to Joshua advising him to flee the country.

Malay Mail reports that the fifth witness, Selvakumar Peace John Harris, who was the owner of the couple’s residence, recounted that then youth and sports minister Khairy Jamaluddin had emailed the pastor, with his urging believed to be related to Joshua’s baptizing a Malay couple in January 2015.

“He sent an email to Joshua and urged him to leave the country. [Joshua] called me and told me about it,” he reportedly told the inquiry, referring to Khairy. Selvakumar was also shown a copy of the email in Penang when the pastor visited him in May 2016.

According to Selvakumar, Joshua felt unsafe and wanted to heed the urging.

The witness also testified that he saw Joshua baptizing a Malay couple, in addition to 10 other Malay couples — a claim that led to Suhakam commissioner Datuk Hishamuddin Yunus asking him whether he was sure they were Muslims. Selvakumar concurred.

A Malay-Muslim who converted to Christianity, Joshua, and his Indonesian wife Ruth, were last seen on November 30, 2016 and subsequently reported missing on March 6 in 2017.

Suhakam alleged that the couple might have been victims of enforced disappearance and announced on January 26 that a public inquiry into the disappearance of the couple would begin on Feb 18 in Kuala Lumpur.