A Farmland for Persecuted Hmong Christians in Vietnam 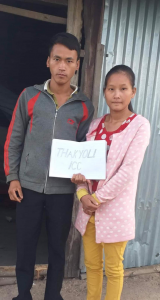 02/26/2020 Washington D.C. (International Christian Concern) – Chao Vang* and his wife are ethnic Hmong who resided in Son La province in the Northwest region of Vietnam. Their decision to follow Christ in August 2018 turned their lives upside down.

He soon was taken by village administrators and forced to recant his faith several times. After he repeatedly refused, a shaman was brought to his house and he was asked to perform Hmong traditional worship rituals. Yet he still refused to comply.

Seeing his persistence, several villagers came to his house in October and tied him up. The village elder slapped him six times and requested someone to burn chili peppers and blow the acrid, spicy smoke towards Chao Vang’s eyes.

While Chao Vang was being tortured, a villager said to him, “The Vietnamese Communist Party founder Hồ Chí Minh had built the nation, including all the cropland, and therefore this leader deserved to be followed instead of Jesus.”

Another villager said that if Chao Vang wanted to worship Christ, he should be expropriated and expelled from the village.

Although he was finally let go, what awaited him this time was pressure from his family. On October 23, his brothers and cousins who disapproved his new faith came and took his family’s possessions. His uncle also ordered Chao Vang’s wife and child to come and stay with him.

Unable to endure the suppression any longer, Chao Vang took his wife and their young kid and fled to a community in Dak Lak Province in January 2019.

Since his relatives took all his properties, he could only sell a few sacks of rice, gathering barely enough money for their escape. Without any money left, they were enduring extreme hardship in their new community, working odd jobs to put food on the table.

Upon learning their needs, ICC worked with a partner to buy a piece of farmland, about 0.35 acre for cultivation to ensure that he and his family will not go hungry.

With gratitude, Chao Vang told ICC, “I would like to thank you, ICC, and wish you all with a new year full of peace and happiness, that you succeed in all your work.”

He also asked for prayers for his family, so that they will stay healthy, having stronger belief in the Lord, and will love God more.

04/01/2020 Chad/Nigeria (International Christian Concern) – Over the past few weeks, while the world is distracted and consumed by the Coronavirus pandemic, Boko Haram has been causing mass chaos and devastation in the lake Chad region of West Africa. There have been a number of major attacks by the group in the last month that ... More

Pastor in Nepal Arrested for Praying Against COVID-19 Virus

03/29/2020 Nepal (International Christian Concern) – According to Morning Star News, a Christian pastor in Nepal has been arrested for praying against the COVID-19 virus on a video that has circulated on social media. The pastor, who was taken into custody on March 23, could face up to six months in prison after being wrongly ... More

03/30/2020 Pakistan (International Christian Concern) – On Sunday, March 29, claims of a charity in Pakistan refusing to serve food aid to Christians and Hindus went viral on social media. The story brought into sharp focus the discrimination minorities in Pakistan often face due to their religious identities in the midst of crisis. News of the ... More

04/03/2020 Pakistan (International Christian Concern) – Christian leaders in Pakistan are reporting another incident in which Christians were denied government food aid amid the COVID-19 crisis. This marks the second report of government aid being denied to minorities in Pakistan due to their religious identity. “A few days back there was an announcement made through a ... More

Cross Removed from a Three-Self Church in Anhui

04/02/2020 China (International Christian Concern) – On April 1, local authorities came to a state-sanctioned church in Fuyang city, Anhui, and removed its cross. According to a video posted by Father Francis Liu from the Chinese Christian Fellowship of Righteousness, a crane truck can be seen parked in front of a Three-self church. The person who ... More

Minorities in Pakistan Claim They Were Refused Aid Due to Their Religious Identities
03/30/2020 Pakistan (Internati... more

From Despair to Dancing: Surviving the Bomb’s Flames more

“Why We Serve the Persecuted” Part 1 more

Another Church in Algeria Closed by Authorities more

PRESS RELEASE | In a series of attacks beginning on March 31, Fulani militants killed 10 Christians in two Nigerian villages. This represented the eighth attack in a span of three years for one of the villages. … See MoreSee Less

ICC has learned that on March 31, despite serious concerns and restrictive measures to stall the COVID-19 pandemic, Fulani militants continued to move freely and attacked two Christian villages in Nig…

If you would like to stay up to date on other ways that we are serving persecuted children and their families, sign up for ICC’s weekly persecusion updates today: www.persecution.org/sign-up/ … See MoreSee Less

Over the past few weeks, while the world is distracted and consumed by the COVID-19 pandemic, Boko Haram has been causing mass chaos and devastation in West Africa. … See MoreSee Less

04/01/2020 Chad/Nigeria (International Christian Concern) – Over the past few weeks, while the world is distracted and consumed by the …

May God protect his people from the virus and from BH and may God remove all demonic protection from BH. Have mercy on them all. May they have dreams and visions of Christ and an opportunity to repent.

Help us our lord save us

May God protect His people and soften hearts toward Him.

No wonder no one is faceing or challenging them especially the goverment who is cooperative with deaf ears. 😡😡😡😡

So easy to be tracked by a drone.

How can these people cover their faces even in such a hot and humid weather conditions…..don't they feel hot..

As bad a pandemic as coronavirus!

Covid19 must be passed on to them

Isn't there any men over there with a backbone?

Cut all aid to Africa…when the failed governments begin to protect their people, we can discuss aid.

They need to take the army and go get them so fast they wont know what hit them.

Prayers for God to stop these terrorists

They are Satan's own creation. Anti human pigs.

Coronavirus is coming to them …

On April 1, local authorities came to a state-sanctioned church in Anhui, China and removed its cross. … See MoreSee Less

Cross Removed from a Three-Self Church in Anhui | Persecution

1 Corinthians 1:18 "For the message of the cross is foolishness to those who are perishing, but to us who are being saved it is the power of God."

11 Blessed are ye, when men shall revile you, and persecute you, and shall say all manner of evil against you falsely, for my sake.

12 Rejoice, and be exceeding glad: for great is your reward in heaven.

Each day that China or any other government displays hostility toward Christians, they practically fulfill prophecy.
Our Father, have mercy on them, for they know not what they are doing.
I pray that communism and communistic ideologies bow at the feet of our Lord and Saviour, the Lord Jesus Christ. In Jesus' name I pray, Amen!

They can remove the cross but not Jesus. Amen

May the Lord allowed it.

don't worry, God is not on cross

Wishing for another covid right!!! Useless, no brain

While the rest of the world works to slow the spread of COVID-19 by reducing contact between individuals, some do not have the choice to distance themselves. Among this number are healthcare workers and first responders, but a lesser-known group finds itself vulnerable as well—prisoners of conscience. … See MoreSee Less

Prisoners of Conscience Vulnerable in Face of Pandemic | Persecution

May the LORD continue to be merciful to medical workers who are risking their lives to save the infected. Over 25,000 infections in the US alone today! May God our Healer hear our prayers. Luxembourg! And the rest.

I have been and will keep on praying that this plague will pass over our persecuted brothers and sisters, as the tenth plague passed over the Israelites in the land of Goshen. Will you pray this daily with me?

May God supernaturally protect them. May they have the anointing of Luke and Peter the Apostle ! 🕎🔥

Praying for God’s protection from pathogens, pestilence & injuries & his provision for all our brothers & sisters as well as all the oppressed, poor & needy around the world

Some shocking stories, in my prayers