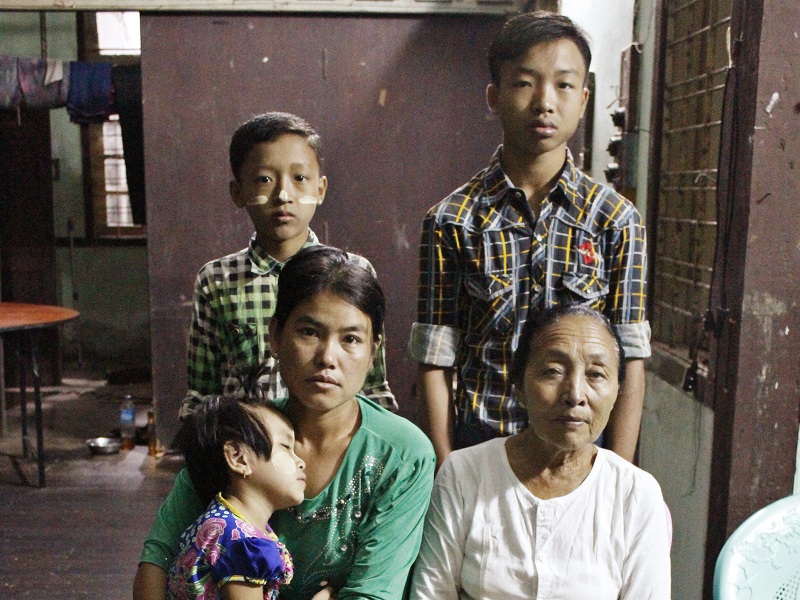 [vc_row][vc_column][vc_custom_heading text=”” use_theme_fonts=”yes”][vc_custom_heading text=”By Gina Goh” font_container=”tag:h6|text_align:left” use_theme_fonts=”yes” css=”.vc_custom_1580142676791{margin-bottom: 22px !important;}”][vc_single_image image=”112117″ img_size=”full” add_caption=”yes” alignment=”center”][vc_column_text]02/22/2020 Washington D.C. (International Christian Concern) – Sitting in a rickshaw on a bumpy path deep in the jungle of Myanmar, I knew that the interview ahead would be heart­breaking. I was meet­ing with a widow who lived in an active fight­ing zone, left with three young children to raise on her own after her husband’s disappearance.

As we entered the Christian shelter where ICC provided for her two sons to stay and receive after-school tutoring, the dimmed light in the room pre-determined the grim nature of our conversation.

In January 2019, Pastor U Tun Nu in Rakhine State was taken from his home at gunpoint by the AA, who reportedly told him that they needed to question him. He was never heard from again. On February 1, his mission organization, Gospel for Asia, con­firmed his death. His wife, however, never got to see his body and still hopes for his return.

“I just want to see him again,” Pastor U Tun Nu’s wife suddenly burst into tears, lowering her head in distress.

When I asked her 16-year-old eldest son how he is coping, he responded with silence and a blank face. The shelter administrator jumped in and told me that he is unable to answer at the moment, and he never talks about his father with anybody. He is still traumatized.

Losing their sole breadwinner has taken a toll on her family. Life with her four-year-old daughter became increasingly difficult thanks to the ongoing conflicts in their village. They are without jobs, and the other villagers can only help so much with their farms. It doesn’t help that some of their harvests are also “taxed” by the AA. The 16 families in the vil­lage are barely making ends meet.

She is in the midst of a titanic struggle to hold her family together.

Others have also experienced this grief. A few days later, in northern Kachin State, I was invited to attend a housing project completion celebration and memorial service for another pastor, Pastor U Thar Tun, from the Myo ethnic group. He was taken from his home by the AA in Buthidaung township last February.

Similar to Pastor U Tun Nu’s case, the AA came to Tun’s home and demanded that he come outside so they could talk with him.

But when he stepped outside, the rebels reportedly tied him up and dragged him away. His remains were found two months later in a nearby forest.

His wife, Daw Hla Sein, fled to the house of her son’s in-laws. ICC assisted her with funds to build a home in the compound so she could have her own space to live in with her daughter.

As soon as we arrived, one of her five chil­dren, Win, welcomed us warmly with a grin on her face. With limited English, she tried her best to express their gratitude to us. Our interview with the family began as we were ushered into their home, where slices of fruit and tea awaited us.

While Daw Hla Sein remained calm throughout the interview, she admitted that she had sleeping problems since her hus­band’s abduction. “I feel like I am going insane. I remember vividly what happened to him, and I am unable to forget,” she said, before telling us that Win has also suffered a great deal.

Before she could finish her sentence, Win, who had been nothing but cheerful and cor­dial, suddenly interrupted, shouting to her mother, “Do not speak for me!”

“They are getting really emotional now,” my Burmese colleague whispered to me, con­cerned. In response, I turned to Win and asked how she feels, knowing that under her smile, there is deep sadness buried beneath.

Win told me that she was very sad when her father passed away, and even now, whenever she thinks about her father, it still pains her.

The grief of these victims manifests itself in their silence and tears, or is disguised by their mannerly smiles.

While none of them wailed or expressed their rage, their sorrow often consumes them and leaves them speechless in the face of unexpected death, caught between ongoing armed conflicts and interreligious tensions as ethnic minority Christians in Myanmar.

As we work with these women to alleviate their pain, we deeply feel the grief that they are going through. We invite you to join us in an outpouring of prayer for Myanmar, and to support our ministry so that we can continue to care for these weary families.