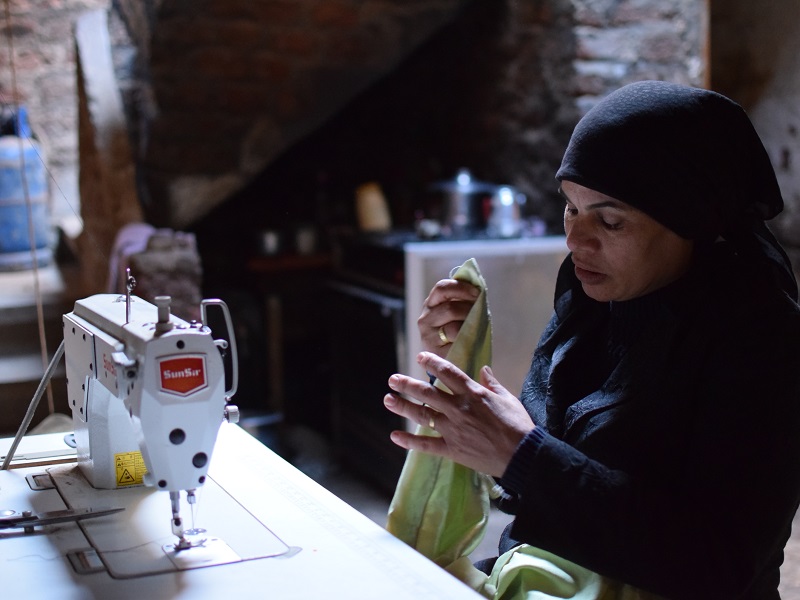 02/19/2020 Washington D.C. (International Christian Concern) – “We were very stupid.” It is a statement of grief uttered by many Christian women living in Upper Egypt. They are marginalized because they are Christian, then marginalized again because they are women. At first, it was a statement made because they lived in a society that said women have no value. But as they watched other women take advantage of ICC’s Hope House program, they realized women do have value—that Egyptian women have untapped potential. The statement became one of grief, a wish for opportunities, such as those achieved by Nawara.

These were the kind of comments uttered by Nawara’s friends and neighbors. When she first joined Hope House, everyone resisted. A special Hope House program had been created that targeted at-risk Christian women who were forced to drop out of school and marry from a young age, keeping them from all the opportunities that education provides those who finish. Nawara’s husband is a farmer, and his income is tied to the seasons. With five kids to provide for, money was always tight.

Nawara had just received back surgery weeks prior to learning about this program. Any kind of movement was difficult, but Nawara saw an opportunity to grasp an education. Everyone discouraged her from this decision. Her husband said, “Don’t attach yourself to useless things.” Her women neighbors taunted her, “You are too old to learn!”

She ignored these rebukes. Despite the pain, she faithfully attended every Hope House class offered to adult women. For the first time, she learned literacy. Then she was taught several crafts, with the teachers hoping that Nawara would attach herself to one of these skills and turn it into a successful source of income.

In the beginning, it was very hard. Literacy was a challenge, but five months into her classes, Nawara realized that she was smart. She could read and write. It didn’t stop there. Nawara pursued every skills class with enthusiasm, amazing everyone, even those who first rebuked her. “I did not know how to cook very delicious food or desserts or how to style my daughter’s hair,” she says. “Now I can do all of these easily!! My husband is very happy with the delicious dessert foods he eats, and my daughters are happy that I can create many hairstyles. Now when they attend wedding parties, they feel pretty and very beautiful.”

People began to realize that Nawara was actually benefiting from an education and were astonished at her family’s transformation. So when Nawara completed the program and requested a microfinance loan from Hope House to establish a tailoring business, the answer was obvious. Her husband, previously so strongly against her learning these skills, was supportive. Nawara couldn’t believe that she now had everything needed to provide a constant source of income for her family.

“It was like a dream!” she recalls. When Hope House delivered her a sewing machine, she was so excited. She has not forgotten her first client. “She was a neighboring woman. She asked to sew (fix) her four blouses, and I accepted. It was just one hour, and I returned her blouse back!!!” In one hour, she had earned nearly half of the average daily wage for many people in Egypt. It was more than her family had ever thought possible.

The neighboring women, who at first taunted her for choosing to become educated, were shocked. They became disappointed that they never attended Hope House. “Wow, Nawara was right,” they said. “Now she is very clever and smart in cooking, reading, and writing.”

One of Nawara’s sons is finishing his mandatory military service and did not know that his mother was taking these steps to improve the family’s life. He was shocked when he returned home to discover how much she has changed. “He was surprised and so happy” that she had pursued her dream. His military clothes had never fit him properly; it was as if they belonged to a much larger man. But with these skills, Nawara transformed them into garments that fit.

These changes have encouraged Nawara’s daughters also to finish their education and learn a skill. They want to follow in their mother’s footsteps. One of her daughters is quite eager to learn sewing, which is a challenge since she is nearsighted, and a needle is so small to thread. But her daughter can’t afford daily expenses with her other job, and sewing would be a simple way to improve her income. “I don’t know how to cut jellabiya cloth, but I will learn that. Maybe I will sew jellabiyas for women, and why not men (too)!” Nawara is an eager teacher.

The family’s success is contagious. It inspires the community that women do have value, something worth contributing to society. For Nawara, these dreams would never have been realized without Hope House. For this is the goal of Hope House—helping marginalized Egyptian Christians reach their full potential.