Weep with Those Who Weep 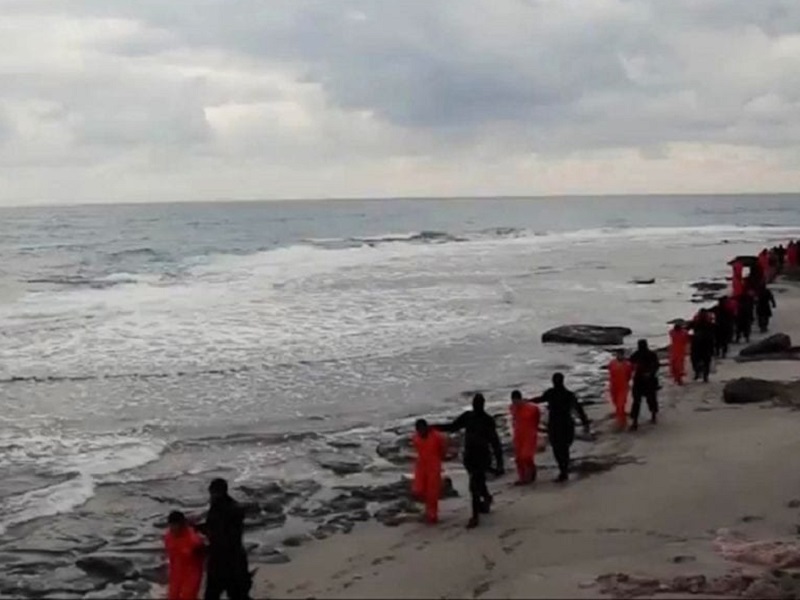 [vc_row][vc_column][vc_custom_heading text=”” use_theme_fonts=”yes”][vc_single_image image=”112074″ img_size=”full” add_caption=”yes” alignment=”center”][vc_column_text]01/31/2020 Washington D.C. (International Christian Concern) – When I first saw them walking along the beach, I knew it wasn’t for a day of play. But, I couldn’t have imag­ined what was to come. Each victim, dressed in an orange prison jumpsuit, was escorted by an ISIS soldier. They were forced to kneel, their sentence was read out, and the knives were revealed.

That’s when the horror began.

For a more than a decade before ISIS’s mass beheading of 21 Egyptian Christians, ICC tried to wake the Western media and Western Church to the rise of radical Islam around the globe. Given ICC’s focus on persecution, we knew that most instances of modern persecution are driven by radical Islam. We witnessed radical Islam’s worldwide expansionist movement, and we weren’t afraid to be vocal (or politi­cally incorrect) about it.

Unfortunately, for many years, our message often fell on deaf ears.

That changed after the mass beheading. There were no more raised eyebrows or suspicions when we spoke about radical Islam. That one video woke up the world. Most people could finally see that pure evil had been unleashed on the world, and it was coming from radical Islam.

In June 2014, about six months prior to the beheading of the 21 Coptic Christians, ISIS sprang onto international headlines. They had captured Mosul, Iraq’s third largest city, and were attacking Christian villages across Iraq’s Nineveh Plains.

Hardened by the fighting in Syria and elsewhere, the jihadists moved through Iraq like a plague, raping and butchering women and children along the way. Christians were marked for forced conversion, expul­sion, or execution. Entire cities were emptied of Christians for the first time in nearly 2,000 years.

Within six months, 1.2 million Iraqis were driven out of their homes, and at least 300,000 IDPs fled into the Kurdistan region within the first six months. Most arrived with absolutely nothing but the clothes on their backs, robbed by ISIS militants along the way. They lived in the open, without shelter, totally exposed to the 115-degree heat of Iraq’s summer sun.

The churches in Iraq called out to their brothers and sisters in the West for aid. Western church relief was the main source of assis­tance, as aid from the UN or Iraqi government often did not make it to the Christians.

ICC raised funds from our donors and did what we do best: we sprang into action to become a bridge between the free Church and the perse­cuted Church. Two of my staff members traveled to the frontline city of Erbil in Iraq, only 60 miles away from ISIS. Working together with local churches and Christian organizations, we provided food, water, shelter, and more to thousands within Iraq’s Christian community.

Every square inch of shade was taken up by the Christians who had fled ISIS. They knew that getting out of the sun had to be their first prior­ity for survival.

We handed out food, blankets, water and whatever else was needed. We even hired a water truck to bring 15,000 gallons of water to a group of Christians who didn’t have access to water.

In times of great persecution, when Christians have lost everything, they feel desperately alone and hopeless. As you may be able to relate, they often feel abandoned by the Church and even by God, their Father.

ICC often meets them at this point. When God meets their physical needs, we say, “We heard you; we feel your pain.” We weep with those who weep.

This touches them on a deep, deep level. It comforts them in just the way they need and sends a clear message to them: “God your Father and His Church have not forgotten you.”

Remember, we are one body. Meaning, Jesus’s Spirit is in all Christians, and He feels their pain. So when one part of the body is being crushed and broken, we respond and offer what we can to help.

1 Corinthians 12:12-14 says, “There is one body, but it has many parts. But all of its many parts make up one body. It is the same with Christ. We were all baptized by one Holy Spirit. And so we are formed into one body. It didn’t matter whether we were Jews or Gentiles, slaves or free people. We were all given the same Spirit to drink. So the body is not made up of just one part. It has many parts.” (Jeff King Version)

This is the very core of why ICC exists.

In the West, we are usually on the giving end (financially) to the global body. However, I’ve found that we are richly repaid because we see faith lived out on a different level. We see true courage, true devotion, and faith so real that it often startles us.

Did you know that each of those 21 Coptic Christians had the chance to live?

Had they only turned from Jesus and converted to Islam, they would still be alive. If you watch the video closely, you can see some of them saying something. They were repeating the name of our Lord Jesus to keep each other and themselves strong.

ISIS thought that this video would terrorize the Church, but it had the opposite effect.

When we worked with the families of the martyrs afterward, they would hold up pictures of their murdered loved ones.

Yes, they were filled with sorrow over losing their loved ones. However, the pride they felt in the courage of their husbands, sons, and fathers was evident.

For 1,400 years, Christians have suffered at the hands of Islam, but nothing can turn them away from their faith in Jesus. They see themselves as joining in the suffering of their ancestors and following their Lord to Calvary.

“I saw thrones on which were seated those who had been given author­ity to judge. And I saw the souls of those who had been beheaded because of their testimony about Jesus and because of the word of God. They had not worshiped the beast or its image and had not received its mark on their foreheads or their hands. They came to life and reigned with Christ a thousand years.” — Revelation 20:4 (NIV)

Those brothers on the beach, quietly whispering to themselves and each other, were steadying their hearts. They knew there would be a moment’s worth of pain, but their lives were about to begin.