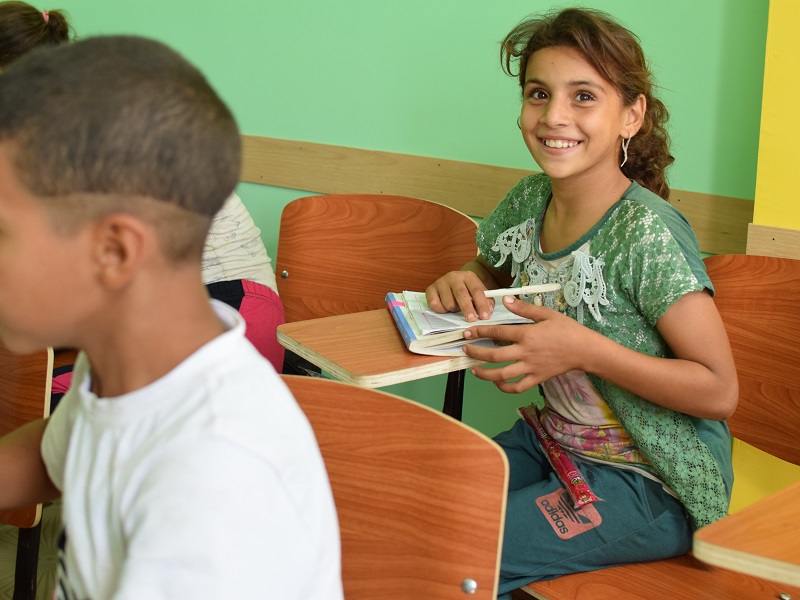 01/22/2020 Washington D.C. (International Christian Concern) – In communities where poverty reigns, the Gospel is so often communicated through the visual. The color green evokes the message of the Holy Spirit bringing hope. Red communicates both the passion of Christ and the martyrs’ passion for Christ. In one Egyptian village, the colors of green and red are united in newly decorating a church that has been born again through ICC’s Hope House program.

For decades, the government has regulated the presence of churches, slowly smothering Christian communities into non-existence. In this Minya village, the church had nearly ceased to exist. The building looked deserted, worn down from years of neglect.

“It was unfinished, the walls on the red brick had no tiles except on the first floor where the church was meeting, but the other was not. Also, from the outside, it was not finished; it didn’t look appealing,” said ICC’s field team leader, recalling the first time he saw the building.

In a village of 14,000 people, only 13 Christians were attending services. It was a church on its deathbed. When ICC approached the pastor about possibly starting a Hope House program at the church, he quickly grasped at the opportunity. Hope House is an after-school program that provides tutoring to Christian children marginalized in Egypt’s public school system. It gives them—and their families—an opportunity to hope for a better life.

The pastor began visiting Christians in the village to explain the program but was initially met with resistance as several families told him that they would not come. He then explained to them, “My purpose is not getting you to join our church, but to give a chance for your kids to be educated by the best teachers. Some of them refused, and others were convinced. Some asked if we don’t come [to church] as parents, would you still accept our kids [at Hope House] and the answer was yes.”

As the pastor started building a list of interested families, ICC entered the church and began restoring the neglected building. Many renovations needed to be done if the church was to begin hosting children on a daily basis. The dirt floor needed tiling, the walls needed wiring, and the stairs needed a railing. After weeks of repairs, classrooms started to take shape. Desks moved into the brightly painted red and green rooms, a water cooler was installed, and whiteboards hung on the walls. Hope House was finally ready.

“We started with the families who accepted, but after a while when word started to spread that we loved the kids and were serving them with the best service, (other) people started sending their kids,” said the pastor.

The center runs in shifts that mirrored the public school system so that after the public classes released the kids, the appropriate tutors would be ready to receive them at Hope House. Many subjects are taught, including English, Arabic, math, science, and geography. However, the Christian children were massively behind their grade level, making teaching a challenge.

“The teachers are positive; they are happy about serving the kids, and they are seeing progress in the education level of the kids. Many kids didn’t have a chance to put in a good foundation. There are kids who are memorizing the lessons very well but can’t read or write,” observed ICC’s field team.

Still, the teachers patiently persist, modeling to the children’s families the love of Jesus. As the families felt this love, they became more welcoming to the church. “Before, I couldn’t visit the people [in the village],” said the church’s pastor. “They wouldn’t welcome me because they didn’t know us. Now I am visiting houses I never thought I’d be able to go there.”

“I am seeing the church is growing simply because they understood that we really love their kids and want to serve them well,” he added. “They felt our love, and we encourage them to go to their own churches, but still they want to attend our family meetings.”

The family meetings are a new program of the pastor’s church. Before, with only 13 Christians attending the church’s services, it was impossible to host events at the church. But now, 70 Christians are regularly coming to adult discipleship groups or “family meetings.” At first, they met twice a month. But their popularity has encouraged the church to host these meetings weekly. The topics are simple but not always easily grasped.

The pastor shared one example of how he was trying to model a healthy marriage during a recent meeting. He told the attendees, “You have to tell your wife every now and then, ‘I love you.’  A man said, ‘What is this?! Are you teaching us to be impolite?’”

“I was astonished,” recalled the pastor. He told the man, “I am telling you to tell your wife sometimes that you love her. The man said, ‘No, no, no. This is impoliteness.”

Those families can have a future together.

That Christianity can thrive in Egypt.