Picking Up the Pieces in Sri Lanka: Part 3 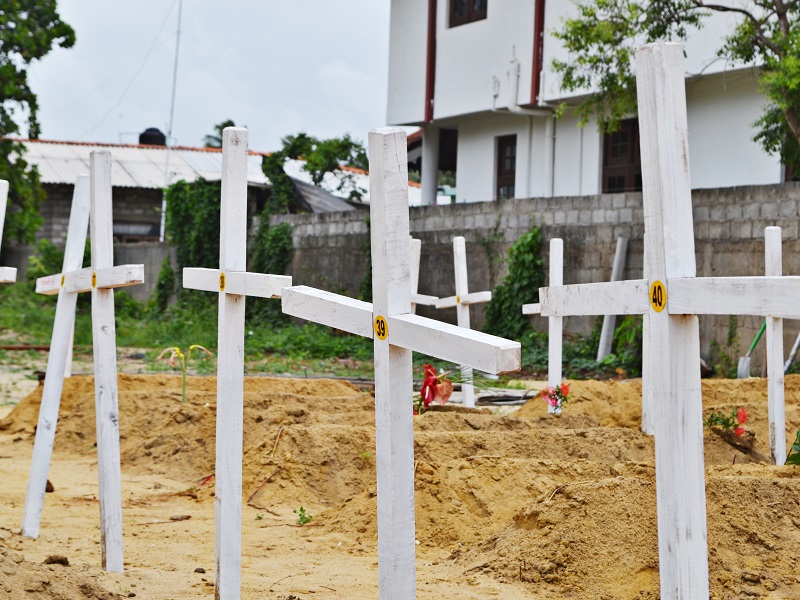 In case you missed them, you can read Part 1 and Part 2 here.

10/08/2019 Washington D.C. (International Christian Concern) – While the casualty figures at St. Anthony’s Shrine and St. Sebastian’s Church were high­er, the emotional depth of the tragedy at Zion Church in Batticoloa was equal, if not worse.

Out of the more than 30 killed at Zion Church, 14 of the victims were children. They had just finished participating in a Sunday School program. Tears flowed freely as I interviewed families that had lost chil­dren in the bombing.

“I was the pastor in charge that day,” Pastor Thirukumara told me as we sat in his home. “After leading the service at Zion, I left to lead worship at another location. On the way, I saw a man standing near the gate of the church’s courtyard.”

Unbeknownst to Pastor Thirukumara, this was the man who, within mere minutes, would wreak havoc on his church community.

“I said hello to this man and he answered,” Pastor Thirukumara recalled. “But, this was a lie. He was just biding his time.”

“After 10 minutes from leaving the church, I received a call telling me to come back,” Pastor Thirukumara continued. “When I returned, all I saw was blood and body parts everywhere.”

According to survivor accounts, the man standing by the gate received a telephone call shortly before the blast. It is likely that he was waiting to detonate his deadly payload to coordinate with the other suicide bombers.

At that very moment, the children of Zion Church had concluded an Easter perfor­mance and entered the church courtyard. There, they lined up to receive a snack pro­vided by the church, placing them directly in the path of the suicide bomber.

“I immediately called the senior pastor who was in the UK,” Pastor Thirukumara recalled. “I used a video call to show him what had happened. I then began to look after the people. It was hard the tell the dif­ference between the injured and the dead.”

“I was also looking for my son,” Pastor Thirukumara explained, emotion edging into his voice. “I first heard he was in the ICU, but was later told he was dead.”

Despite these mixed reports, Pastor Thirukumara continued to search both in the morgue and the rubble of the church for any sign of his son.

“I checked for my son for a long time,” Pastor Thirukumara continued. “I was look­ing even for just pieces of his body. On my third visit to the morgue, I noticed a piece of clothing on one of the bodies. It was a piece of the purple shirt my son had worn to church that day.”

“That morning was a special service for the children,” Pastor Thirukumara explained. “My son wore a nice purple shirt and looked very smart when he left the house. Now, I could hardly identify his body because of the burns. There were only bones where his hands were supposed to be.”

With a sigh of emotional exhaustion, Pastor Thirukumara said, “My son is now with Christ, which is a blessing. But this is still very hard to suffer.”

“I had plans for three children and my ministry, but now with the loss of one of my sons, life is difficult to rearrange,” Pastor Thirukumara continued. “The other children are still crying. I cried yesterday when I started thinking about him.”

“We are doing our best to remember him,” Pastor Thirukumara said, pointing to a small memorial across the room. “He was a ‘mobile Bible man.’ He memorized two chapters of the Bible to win a competition last year. His older brother is now working hard to win this competition for his younger brother’s memory.”

As I left Pastor Thirukumara’s home, I noticed a white cross and the words “Jesus Christ” boldly written across the door. I was unsure why, but this gave me comfort.

Perhaps it helped me understand that, despite the family’s struggles, the writing on the door showed their eyes were still fixed on Jesus. Both as their savior and, perhaps more importantly in this moment, as their comforter.

When I completed all of my meetings in Sri Lanka, I found myself both over­whelmed and emotionally drained. The lives of so many had been absolutely shattered and many were still in a state of shock.

As I left Sri Lanka, the challenges faced by the survivors were difficult to comprehend. In some cases, the damage seemed too great for there to be any real recovery. I started to feel depressed.

Then, I remembered the writing across Pastor Thirukumara’s door. Jesus Christ. These simple words reminded me of a prom­ise Jesus has for the persecuted. In Matthew 5, Jesus says, “Blessed are those who are per­secuted for righteousness’s sake, for theirs is the kingdom of heaven.” For those who lost relatives in the bombings, they take comfort in the fact that their relatives are now receiv­ing the rewards of this promise.

While the road to recovery will be dif­ficult and picking up the pieces will be a challenge, I took comfort in this promise. As my flight made its final boarding call, I found myself saying a simple prayer, “Lord, help me to be a blessing in the lives of these persecuted families.”