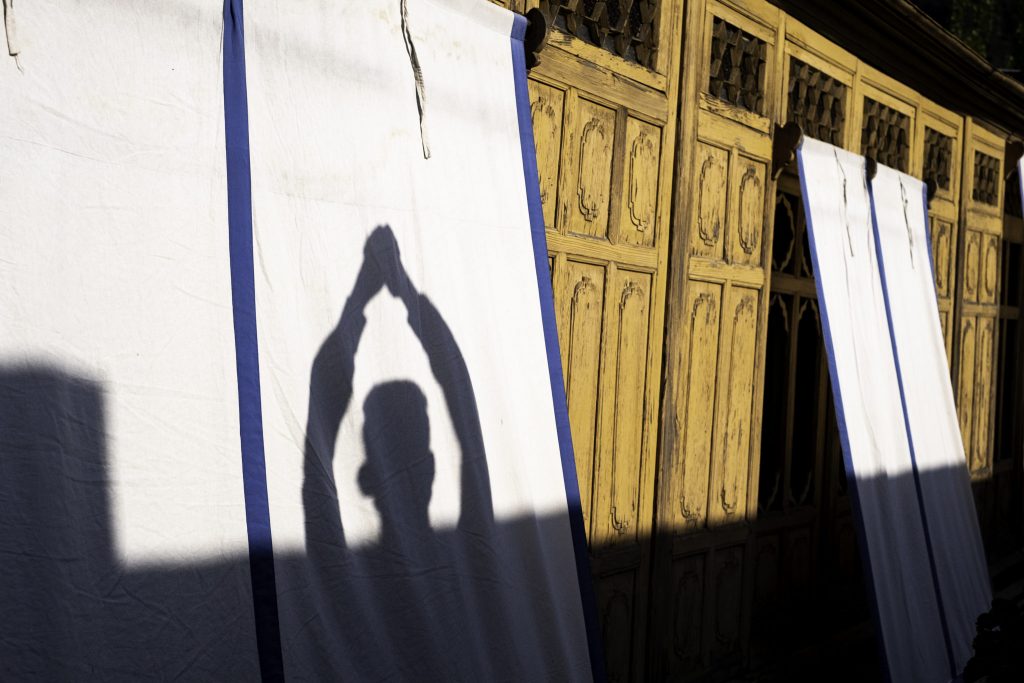 Raveed, a young Kashmiri Christian, lifts his hands in prayer to Jesus in the afternoon sun on Kashmir’s Dal Lake

With perfect posture, seventeen-year-old Raveed walks slowly down a dock as he looks out across the surface of Dal Lake, located a short distance from the city of Srinagar. A gentle afternoon breeze disrupts the surface of the water around the lake.

Dal Lake is a picturesque spot at the base of the Himalayas in the Indian-administered territory of Jammu and Kashmir. Although the territory has consistently seen unrest since India gained its independence in 1947, the flow of Indian tourists seeking cooler mountain climates have drastically declined in the last few years in response t000o increasing political unrest in the area. Kashmir recently made headlines again in August when the Indian Parliament issued the Jammu and Kashmir Reorganization Act of 2019, and has been enforcing these new changes in order to create provisions to reconstitute the state of Jammu and Kashmir into two union territories.

Prior to the introduction of the bill, the central government locked down the Kashmir valley with a heavy increase of military forces preventing the assembly of Kashmiris, and placing political leaders under house arrest.  Reactions from the Kashmiri people included civil unrest and a refusal to cooperate with the Indian authorities. In response, the Kashmiris were placed under a 24-hour curfew by Indian forces and were subject to internet and communication shutdowns. Further fueling the already heated situation, the BBC has reported instances of military-led torture against residents—a claim the Indian Army has called “baseless and unsubstantiated.” 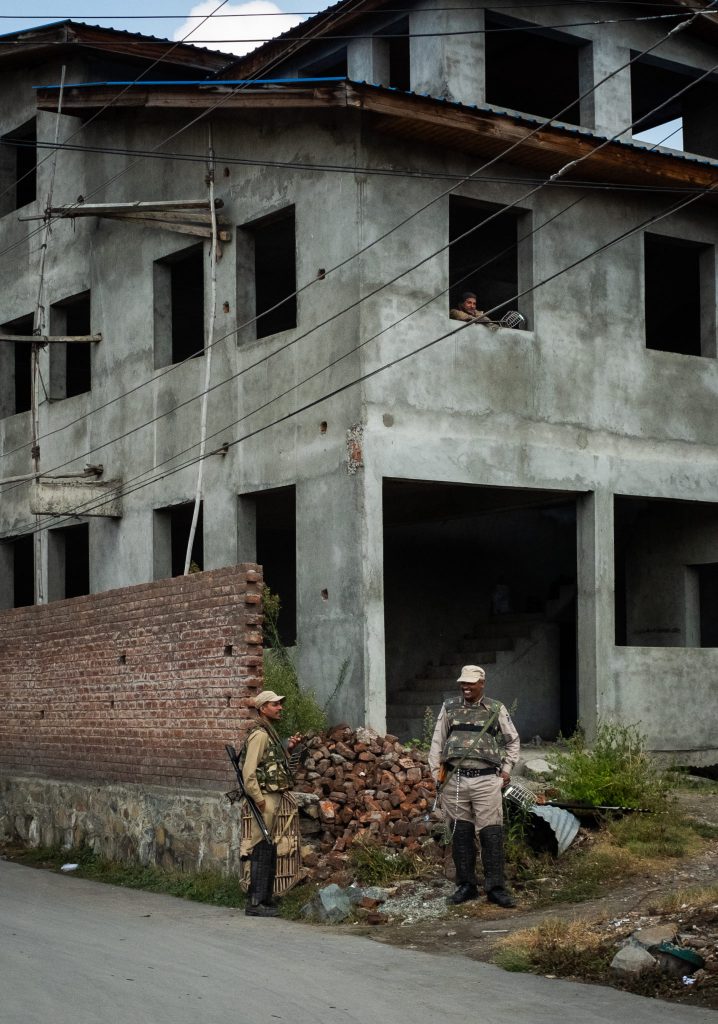 Indian Police officers keep watch over a checkpoint in Srinagar, Kashmir. The majority of India’s military forces are based in the region to suppress conflict with Islamic terrorism and geo-political violence

The chaos, the rioting, and the heavy military presence are the new normal for Raveed. However, even in times of peace, he and his family’s life are under constant threat as some of the only Christians in the Kashmir Valley’s 99.5% Muslim population.

“All of my friends are Muslims and they do not know I am not one”, Raveed shared. He does not worship at the local mosque with them, and they question him about his lack of attendance.

It is common for minority Christians to be issued “Fatwas”—death warrants issued by Muslim jurists according to Islamic law. Along with the geopolitical instability that make Kashmir one of the world’s most dangerous places, the threat of Fatwas creates another challenge for minority Christians in the area, with cases families issuing them against family members who convert to Christianity.

Raveed is part of a small group of Christians pastored by Aaron, a man who came to Kashmir in 1990 to share about Jesus Christ with India’s Muslim community.

“When I came in 1990, my passion and vision and goal was to raise Kashmiri leaders in Kashmir,” Aaron said.

Because he is a leader in Kashmir’s small Christian community, Pastor Aaron understands the big-picture situation of crimes and persecution against believers of Jesus Christ in the region. 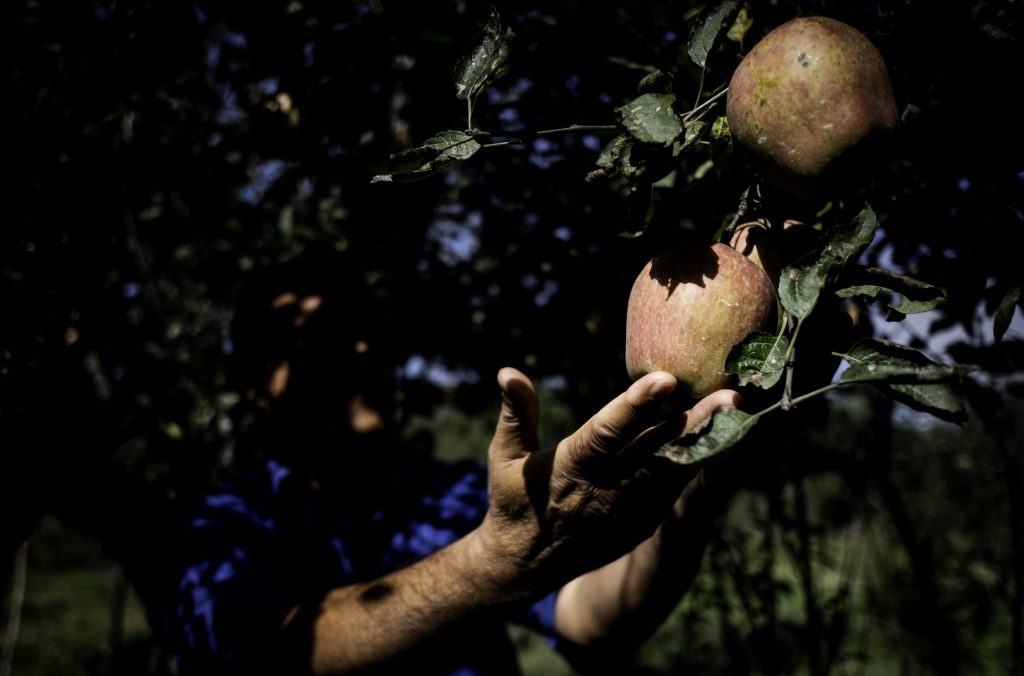 Pastor Aaron came to Kashmir in 1990 to share about Jesus Christ with the majority of India’s muslim population. He is subject to constant threat against his own community, which makes up the Kashmir Valley’s 99.5% Islamic residents. He has no plans on leaving the area, and continues to share who Jesus is with joy and reckless abandonment.

A prime example occurred in 2003 when twenty-seven people, peacefully gathered in Aaron’s home to hear about Jesus Christ, were reported to the authorities by an anonymous caller who claimed that conversions were taking place. The local Islamic police and the military surrounded Aaron’s home, continuing to watch the property from a distance after Aaron denied the accusation. But even frightening occurrences such as these can actually be considered a positive outcome for those having to survive persecution in the region.

Aaron has been imprisoned, robbed of the little income he owns, and has been the subject to multiple threats against his life in Kashmir. He has no plans on leaving and continues to share the characteristics of his Lord in the midst of war, political upheaval, and a population of people intolerant of Christians to the point of death.

Although the reality of death is all to immediate a reality in the lives of Kashmiri Christians, the joy with which they carry themselves can only make believers and non-believers alike ponder the magnificence of the God that they worship and continue to create a further curiosity to know the God that uplifts and sustains their lives.

John Fredricks is an award winning photojournalist based in Los Angeles. His work appears everywhere from National Geographic Adventure to Time Magazine. Passionate about social and humanitarian issues, he wants to impact his generation through a visual medium and put the spotlight on issues around the world. He has launched himself into locations and situations where his life and health were likely in danger in order to use his gift and skill in photography to share the truth. His camera is only an extension of the genuine love and care John feels for those around him.