The Old Has Gone, The New is Here 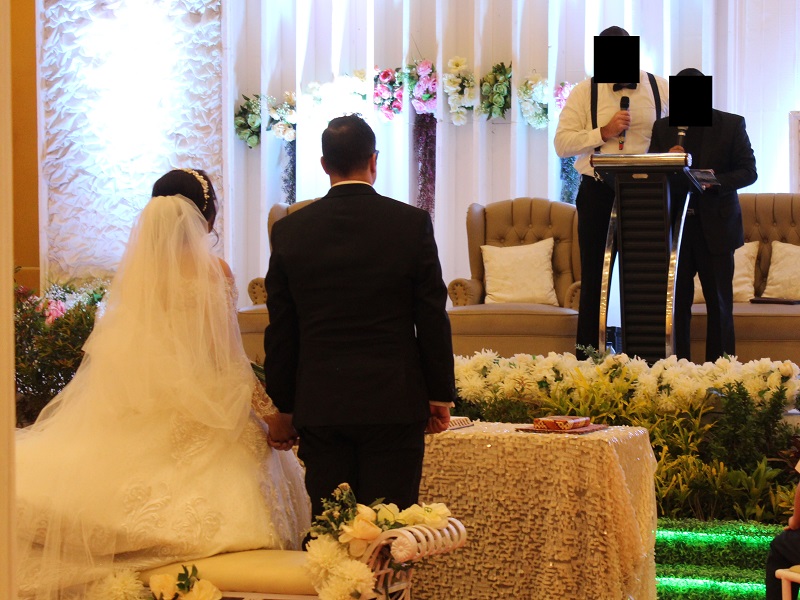 [vc_row][vc_column][vc_custom_heading text=”” use_theme_fonts=”yes”][vc_custom_heading text=”By Gina Goh” font_container=”tag:h6|text_align:left” use_theme_fonts=”yes” css=”.vc_custom_1561650359512{margin-bottom: 22px !important;}”][vc_single_image image=”108771″ img_size=”full” add_caption=”yes” alignment=”center”][vc_column_text]06/27/2019 Washington D.C. (International Christian Concern) – The red carpet was adorned with white petals. The rotunda ceiling showcased a bright sky with doves ascending. Roses bursting with color sat on pedestals, warmly welcoming joyful guests. Children in sophisticated dresses ran around the aisle with laughter. This was the day that the Lord had made, for two to become one.

I had the honor of attending my first Indonesian wedding during a recent trip to the field. While the experience was unique, as I got to witness a quasi-Western Christian wedding in this Muslim-majority country, what was more remarkable was the bride’s story behind this blessed union.

Ika grew up in Jakarta in a Muslim-background family. Her father was a brigadier general. While her mother had a business, as a devout Muslim, she also was an active member of the Indonesia Institute of Islamic Dawah, a conservative Sunni mission-oriented group.

Under her mother’s influence, Ika remembers reciting prayers faithfully as a child. Every time she did not pray, she was beaten by her mom. When she was young, her family would stay overnight at the mosque during Laylatul Qadr— the last 10 days in the fasting month— when Allah allegedly revealed the Quran to the prophet Muhammad.

When her father died, the family’s finances collapsed. Her mother had to return to her hometown in Manado, Sulawesi island to start a business there. She met her sister, Ika’s aunt, who had become a Christian. They often argued about the Quran and the Bible. Ika’s aunt challenged her mom on the meaning of the prayer of the Prophet, to which her mom refused to answer.

On another occasion, someone asked her mom, “If you pray for your prophet, then who is praying for you?” Her mom was left speechless. She felt confused, so she took a closer look at the two books (the Bible and the Quran). As she was reading, she was struck with a sudden conviction that she wanted to follow Jesus. She decided to become a Christian.

Ika’s mother used to wear a hijab, but after following Jesus, she put her hijab aside. The news of her conversion spread fast. Ika also began to receive a lot of pressure through the questions about her mother’s conversion.

Ika was angry at her mother. She felt that her mother had betrayed her father. Given her close relations with her dad, she hated her mom. Ika decided to cut off communication with her mother. For six years, they did not talk. Every time her mom visited Jakarta, they did not meet. When her mother called, she did not answer. She used her aunt as an intermediary between the two of them.

Eventually, she noticed how her mother had changed a great deal; she spoke softly and was no longer angry or pushy. Even when Ika ignored her calls, she wasn’t mad. Eventually, Ika accepted her mom back when she saw the changes that occurred in her life. When her mom later visited Jakarta, they forgave each other and reconciled.

Before she knew it, Ika began taking part in her mother’s ministry. Once, when she visited Makassar, where her mom was scheduled to serve, Ika’s mom asked her to read the Quran, as she delivered the Word of God. On another occasion, Ika joined her mother in Papua. They lived with a devoted family that held morning prayers at 5:00 a.m. each day. During each session, the Holy Spirit touched her heart and she felt encouraged to learn more about Jesus Christ.

One time, she dreamed of a letter with stamp being handed to her, with a voice saying, “Isaiah! Isaiah!” She woke up in shock. She called her mom and asked what the dream meant. Her mom simply responded, “Ika, you can find it in the Bible; there is a book of Isaiah.”

She did not know how to read the Bible. For someone with Muslim background, it was even considered “unclean.” But she was curious nonetheless, and proceeded to read Isaiah 1:1-15. She cried. She felt that she really was a sinner. No matter how much she tried, how many prayers she prayed, she felt filthy before God. She prayed, “If You are truly a living God, make the way so that I can follow you.”

During their next trip to Makassar, as Ika was chatting with the pastor, her mom suddenly approached and said, “Pastor Robert, Ika wants to be baptized.” She was shocked, as she had never shared her feelings about Christianity with her mother. She felt that God had answered her prayer, since she asked Him to give her the opportunity to become His follower. She was baptized that day. This was a moment that changed her life. She returned to Jakarta with a hunger for God.

She was able to find a church in the mall that she could visit every week without raising her husband’s suspicions. One day, after returning from a spirit-filled conference, she sent a message to her friend to share how she enjoyed God’s presence at the conference and was very glad that she attended.

Without realizing it, she forgot to delete the message on her cellphone. When she fell asleep, her husband checked her cellphone and found the message. The next morning, he confronted her about newfound faith.

In fact, her husband had long been suspicious of her conversion, but he had no solid evidence. Even when he inquired about the message, he gave her the opportunity to deny. But Ika felt a sense of relief that she did not need to hide her faith anymore, so she shared with him about her experience believing in Jesus. He found it difficult to accept. Since then, he rarely returned home, or would return drunk, and no longer wanted to share a room with her. She often prayed for her husband and hoped that he would become a believer.

But it was too late. Her husband had already told his family and his mother was strongly opposed to Ika’s faith. Her husband decided to return home to his parents. He no longer wanted to meet or communicate with her. Even her friends became distant. Frantic, she contacted Pastor Robert and asked if she could live in Makassar for a while, for she could not bear the situation alone. She needed friends who could strengthen her in a community.

In Makassar, she was able to grow in her new spiritual home. A friend helped reconnect with her husband to clarify the status of their relationship. Eventually the court agreed to their divorce.

Since then, Ika has lived in Makassar, serving in a Christian ministry while growing in spirituality. After much prayer, God brought Ika someone who shares her love for God. In a miraculous way, they began dating and decided to spend the rest of their lives together. “God is very good,” she shared.

That is why when I saw Ika, her new husband, her mother, and Pastor Robert standing on that stage in the banquet hall, beaming with smiles, I truly witnessed 2 Corinthians 5:17, “Therefore, if anyone is in Christ, the new creation has come: The old has gone, the new is here!” What a joy it is to be able to see God’s amazing grace revealed before my eyes![/vc_column_text][vc_column_text css=”.vc_custom_1561650400396{margin-bottom: 0px !important;}”]