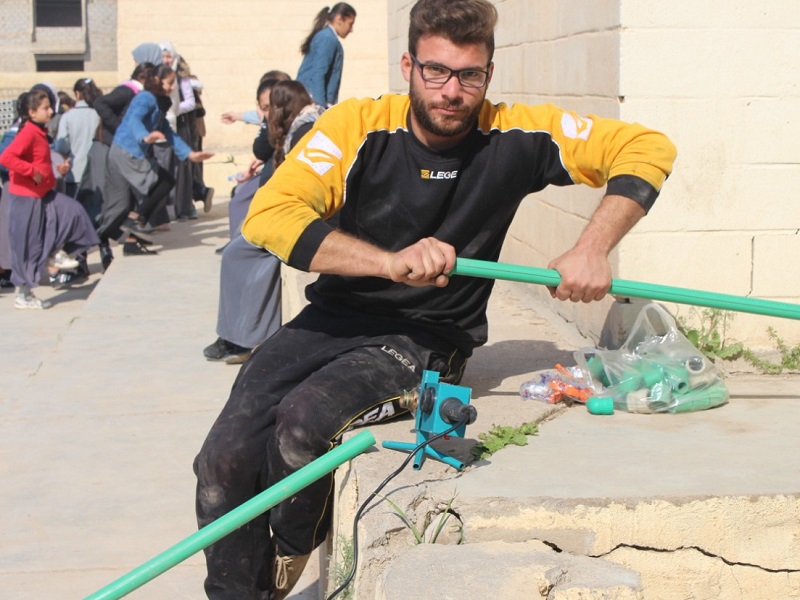 An elderly man appearing in his mid-seventies looked hopefully at ICC’s field representative. Although he certainly needed water in his neighborhood, he was not asking the question for himself. He was asking for the 450 students at a school where he served as principal.

The all-boys school in Iraq’s Christian city of Qaraqosh was left devastated by the Islamic State (ISIS), which maintained control of the city for nearly three years. Nearly half of the city’s residents have returned home, but the infrastructure remains mostly nonexistent.

Water is pumped into Qaraqosh from Mosul, which was once the center of ISIS’s so-called caliphate. The water is not only unreliable in delivery, but also limited in its ability to reach most of Qaraqosh’s population. Water warning notices are a regular occurrence.

“Take care and be careful with excessive use of water! Today and tomorrow there will be no pumping and processing of water,” reads one such notice.

Without water, life amongst the rubble becomes even more challenging. The school principal knows this all too well. Without water, it is a challenging to keep the dilapidated school and children clean. The bathrooms rarely work as they should. The floors are filed with dirt and grime. The classrooms have not been washed.

Just a few blocks away, a girls’ school faced a similar problem. With 500 students, the teachers were left unable to care for the school’s needs without any regular access to water. Both schools were subject to the whims of pumping water from Mosul.

ICC’s team was ready with a solution and began mobilizing partners on the ground in order to provide each of these schools with a water well. High cement walls surround both schools, a common feature in Iraq where constant wars have led soft targets to adapt to the possibility of car bombings. These protective barriers were an obstacle that threatened to prevent these schools from reliably receiving fresh water.

Thankfully, a well digger with small equipment was able to fit inside the gate leading into the boys’ school. The center for girls, however, had an extremely narrow gate. The only way for the equipment to fit inside was to first remove portions of the wall.

This was just the start of the challenges. When ISIS occupied Qaraqosh, the militants also destroyed the city’s electricity. While the boys’ school had repaired their electrical source already, the girls’ school had not. Unstable electricity slowed down the digging process.

The soil in Iraq also makes digging wells complicated. It is common for wells to collapse during the digging process. Unfortunately, the wells at both the boys’ and girls’ schools collapsed. Even so, we were fortunate that the wells collapsed early in the digging process: at seven meters and 22 meters, respectively. This meant that it was easier to re-stabilize the wells, and ultimately build an even better source of water.

The wells were dug until they hit water, at approximately 65 meters each. The entire process took approximately two weeks for each well, and the water was celebrated in both schools. Although the water is not drinkable, it means that for the first time in months, the schools could be reliably cleaned.

Suzan, a teacher at the girls’ school, told ICC, “The school will be refreshed by the well, thank you!”

Rafid, the principal at the boys’ school, echoed Suzan’s thanks. He said, “We will clean the school corridors, rooms and classes more regularly since we have a solid source of water from now and on.” [/vc_column_text][vc_column_text css=”.vc_custom_1561045289175{margin-bottom: 0px !important;}”]