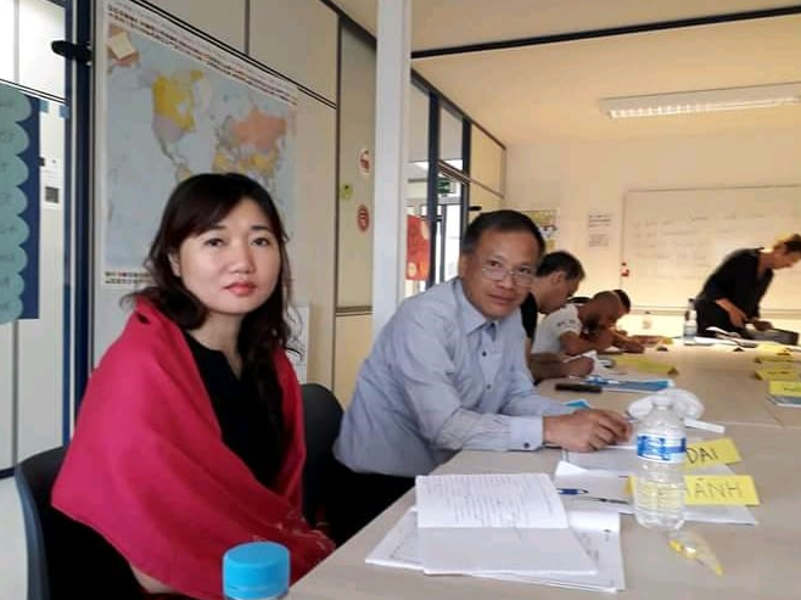 He was charged under Article 88 for “conducting propaganda against the state” last April and, as the founding member of the group Brotherhood for Democracy, received the longest sentence: 15 years of imprisonment and five years of probation. Many international human rights organizations and government representatives condemned his arrest and the legal proceedings that followed.

His work on human rights and democracy are widely recognized by the international community. On April 5, 2017, while still imprisoned, he received the Human Rights Award 2017 of the German Association of Judges.

On June 7, 2018, after many advocated for him worldwide, Nguyen Van Dai and his Brotherhood for Democracy colleague, Le Thu Ha, were released from prison and put on a plane headed to Frankfurt, Germany.

He excitingly said, “I have returned!” before going on to share his appreciation for those who stood by his side throughout the past few years.

He shared, “First of all, I would like to send my warmest greetings, my sincere thanks to all of you, brothers, sisters, friends, ministers and brothers and sisters in Christ in and out, who supported and helped my family, campaigning and fighting for my freedom for two and a half years while I was imprisoned. Especially when I left the communist prison and on my way to Germany, our family received so much joyful and happy cheering from people, me and my wife were deeply touched. I would like to express my sincere gratitude to the governments, the Federal Republic of Germany, the EU, the United States, Australia, Canada, New Zealand, other EU Member States, and international organizations for their efforts and advocacy for my freedom.”

He went on to give an update on his life post-release, “When I arrived at Frankfurt Airport on the morning of June 8, 2018, I was picked up by the German Foreign Ministry. I picked up my baggage, exited baggage claim and Veto! (a human rights defenders’ network NGO) brought us home. After coming to Germany, I needed time to rest, complete paperwork with German agencies and had no means to communicate or contact with people.”[/vc_column_text][vc_custom_heading text=”“I leave the communist prison and go to Germany not for the pursuit of happiness for myself and my family, but for a temporary refuge to seek the best opportunity to mobilize and fight for freedom, democracy, and human rights in Vietnam.”” font_container=”tag:h5|text_align:left” use_theme_fonts=”yes” css=”.vc_custom_1532526114647{margin-top: 50px !important;margin-bottom: 60px !important;padding-right: 20px !important;padding-left: 20px !important;}”][vc_column_text css=”.vc_custom_1532526067645{margin-bottom: 0px !important;}”]

On June 12, he attended a meeting held by Veto! to thank the German Parliament, especially Congresswoman Marie Luise of CDU, who sponsored and campaigned for his release while he was in prison. He also visited the German Parliament building and met with Heiko Maas, German’s Foreign Minister. On the morning of June 13, the federal judge organized the Human Rights Award 2017 reception for him. This is a noble award given every two years to judges and lawyers who dedicate themselves to the protection of human rights.

Dai also shared how he feels about his departure from Vietnam, “Before I was arrested on December 16, 2015, my family and I never intended to leave Vietnam, where I was born and raised. But the sentence of 15 years in prison and five years of house arrest is too long. I will never plead guilty, which means I will have to spend 15 years in prison and I can’t do anything or contribute to the fight for human rights and will not be able to help my family. I leave the communist prison and go to Germany not for the pursuit of happiness for myself and my family, but for a temporary refuge to seek the best opportunity to mobilize and fight for freedom, democracy, and human rights in Vietnam.”

He continued, “Today, in this flat world with internet, social networking and technology 4.0, whether we are in Hanoi, Berlin, London, or Washington, the struggle for freedom, democracy and human rights in Southern Vietnam is equally effective. The level of effectiveness, success and influence of each person depends on his or her ability, capacity, vision, and experience. Now, I still have [an] 83-year-old mother and many relatives there. Many of my beloved friends are still imprisoned, oppressed and harassed in the country. My heart and mind are always on my beloved motherland, where it is anti-democratic and human rights are severely abused.”

He went on to say, “Together with Brotherhood for Democracy, I will do all I can to support, support and support those who are fighting for human rights in the country. I believe that with faith, experience, bravery, international support and especially the guidance and blessing of God, I will be able to fulfill the dream of freedom together with others, democracy and human rights for the Vietnamese people. Once again, I sincerely thank you and wish you good health, peace and happiness to all. I look forward to receiving the cooperation, coordination and assistance from people, organizations for the common struggle for freedom and human rights for the fatherland and its people.”

Dai and his wife Vu Minh Khanh have already found a Vietnamese church in Frankfurt. They are in the process of applying for asylum while learning German as none of them speak the language.

Please continue to pray for them as they adjust to life in Germany and for the asylum process to go smoothly. Pray for them to be able to enjoy freedom without harassment, worship freely, recover from years of stress and fatigue, while they continue to advocate for human rights and democracy in Vietnam from afar.