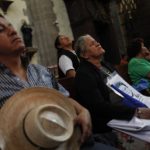 Protestants who were expelled from their village in Chiapas, Mexico, for religious reasons in 2012 were told by the government they could return and their religious freedom would be protected; however, when they returned, under the protection of state officials, they were told they would only be granted entrance if they converted or paid an extremely high fine. This, as well as attacks, beatings, barring Christian children from school and cutting off access to water and electricity, are just a few examples of the types of reli­gious freedom violations they have experienced. To learn more about Christian persecution around the globe, sign up for our free monthly newsletters:  http://ow.ly/LRrca