11/9/2014 Washington, D.C. (International Christian Concern)-Kenneth Bae, one of the two prisoners released from a North Korean prison yesterday, has arrived on U.S. soil. Bae and Matthew Miller were greeted by hugs from family when they landed in California at 9pm last night.

“I just want to say thank you all for supporting me and standing by me,” said Kenneth Bae. “It’s been an amazing two years, I learned a lot,  I grew a lot, I lost a lot of weight.” Bae, who spoke at a press conference at Joint Base Lewis-McChord, south of Seattle thanked the North Korean government for releasing him, as well as President Obama.

It’s a wonderful day for them and their families,” Obama said at the White House. “Obviously we are very grateful for their safe return. And I appreciate Director Clapper doing a great job on what was obviously a challenging mission.”

Terri Chung, Bae’s sister has tirelessly led advocacy efforts on behalf of her brother in attempts to secure his release. Upon hearing that he and Matthew Todd Miller had boarded a plane and were on their way home, Terri Chung said, “Words cannot adequately express our relief and gratitude that Kenneth is finally coming home! We have been waiting for and praying for this day for two years. This ordeal has been excruciating for the family, but we are filled with joy right now.”

“We sincerely thank the United States government for all the hard work and dedication to securing my brother’s release, as well as the release of Matthew Todd Miller. We are also grateful to the DPRK government for allowing them to come home. We must also thank the Swedish Embassy in Pyongyang for their tireless efforts to advocate for Kenneth during his prolonged imprisonment.”

Bae is a Korean-American missionary who was leading a tour group in North Korea when he was arrested and accused of crimes against the state. It is believed that Bae was arrested and charged to 15-years in a labor camp due to his Christian faith. Chung said, “Our family could not have been sustained without the knowledge that Kenneth was in God’s care, when it seemed we were helpless to do anything.”

“The United States has long called on DPRK authorities to release these individuals on humanitarian grounds,” U.S. Department of State spokeswoman Jen Psaki said in a statement Saturday. “We join their families and friends in welcoming them home.”

November 3, 2014 marked two years that Bae had been imprisoned in North Korea. Matthew Todd Miller had been held for seven months. At more than 730 days, Bae’s imprisonment was the longest on record for an American citizen in North Korea, a country widely recognized to be among the world’s most repressive places for Christians.

—
ICC will continue to follow this breaking story. Visit www.persecution.org for updates. 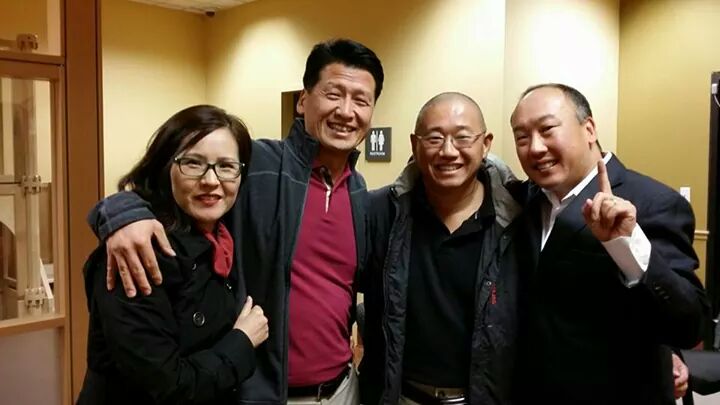 Bae, third from left, with friends in Seattle after his arrival in the United States