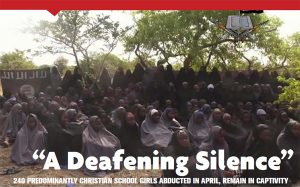 On April 14, 2014, Boko Haram militants kidnapped more than 240 schoolgirls from Chibok in Nigeria’s northeastern Borno State. The press has failed to report that 90% of the kidnapped girls are Christian. Boko Haram is not simply waging a war against “Western education,” as so many continue to state, nor is it waging a “war on women.” Boko Haram is waging a war against the Nigerian Church claiming members of the body of Christ for Islam, torturing the families of the Church’s daughters and selling the next generation of Christians into forced marriages and a lifetime of rape. Learn more about the soft war against Africa’s Christians in our free August newsletter.