One Phone Call could Save Pastor “B” from Unlawful Imprisonment! 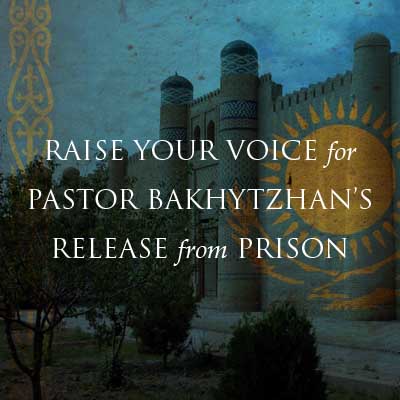 Pastor “B” of Kazakhstan was arrested in May 2013, for his Christian activities. In true Soviet-era fashion, he was charged with ludicrous crimes. In August of this year, they put him in a psychiatric ward (more Soviet-era tactics) in an attempt to break him. Now, the government won’t reveal where they are holding him. We’ve created a digital army and hundreds of you called the embassy yesterday and they lied to you: “We have not arrested a Pastor B.” Please join thousands in creating a digital army demanding for the end of evil and brutality perpetrated against the innocent.
You can call the embassy at 202-232-5488 from 9.00 a.m. to 6.30 p.m. (EST) Don’t know what to say? Use this as a guide: “ Hello, my name is ________ and I am from ________. I am calling on behalf of Pastor Kashkumbayev (Kush-come-by-av). He was wrongly imprisoned in Astana (Ah-stahn-ah) in May and Soviet era tactics were used when he was sent to a psychiatric ward in Almaty (All-mah-tee) in August. This pastor is innocent and I am asking for his release as he has done nothing illegal by practicing his faith. I ask that Kazakhstan treat all people of faith, including Christians, with dignity and allow them to practice their religion with freedom, as your constitution promises. I am following this case closely. Thank you.”