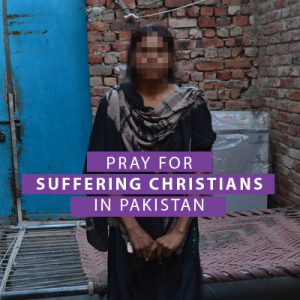 Ayeesha, a young Christian woman in Pakistan, was kidnapped and raped by a Muslim man. The Muslim man kidnapped and assaulted Ayeesha as vengeance on rejecting his advances. When the police were informed of what had happened to Ayeesha, they advised her to convert to Islam and marry her attacker. Since the traumatic attack, Ayeesha has been engaged in a legal battle for her life. To prove rape in Pakistan you must provide four witnesses to the crime, all of whom must be Muslim and have participated in the Hajj, a pilgrimage to Mecca, which every adult Muslim is expected to make at least once in his or her lifetime. Furthermore, if a woman is unable to prove that she was raped, she will be punished for adultery. These requirements make it virtually impossible for Ayeesha, as a young Christian woman to win this case.
ICC has committed to support this young suffering Christian by providing her three months’ worth of food-aid. We have also been able to purchase a sewing machine for her so that she can make money to support herself. Please pray for Ayeesha as she fights for her life in this legal battle. Please also pray for all Pakistani Christian women who are vulnerable to these kinds of attacks because of the low position their gender and religious identity give them