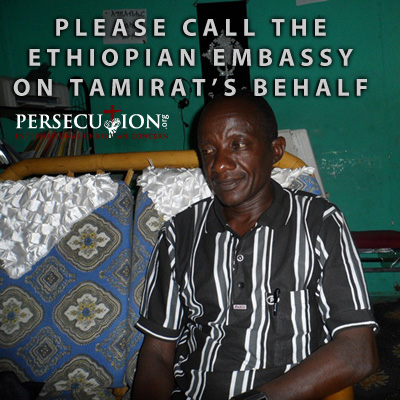 Two Christians in Ethiopia were unlawfully arrested and charged with “crimes against Islam,” even though no such crime exists in Ethiopia’s penal code. Alemlayehu Legese was arrested for owning literature that explores Islam’s history from a Christian perspective; the other, Tamirat Woldegiorgis, was accused of proselytizing to Muslims. Both have been denied formal court appearances and are being held under the authority of the local police commanders; both men have reported abuse.

In an effort to secure the innocence of these men, we urge you to contact the Ethiopian Embassy, either by phone at (202) 364-1200 or e-mail at ethiopia@ethiopianembassy.org, to demand the charges against these Christian men be dropped immediately.

Please pray that the false accusations against these Christians are dropped. Pray that the ongoing harassment of Alemlayehu and Tamirat ends, and pray hope, endurance and peace for both men during this time of persecution. Lastly, pray that these incidents bring international attention, and that authorities in Ethiopia will acknowledge religious freedom in both policy and practice.