Walking from Eastleigh to his home in another district of Nairobi, Kenya, 25-year-old Ahmed (whose name was changed for security reasons) was being followed. Ahmed (below) had made the mistake of mentioning his Christian faith over his cell phone to a friend while shopping in the crowded Eastleigh marketplace. For Kenyans in Nairobi, this would not be a problem, but Ahmed is not Kenyan, he’s Somali. 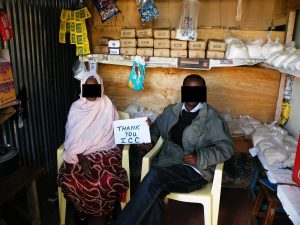 In Eastleigh, where the Somali terrorist group Al-Shabaab and its sympathizers are known to be active, it is assumed that a Somali Christian is a convert from Islam – an apostate – and should thereby be punished in accordance with Islamic Sharia law. Execution by beheading is one form of punishment that is often carried out against Christian converts in Somalia.
Christianity, however, was all that Ahmed had ever known. The son of an evangelist in southern Somalia, Ahmed had been raised a Christian from an early age. He and his family had fled Somalia four years earlier when his father was brutally murdered for his Christian faith. Little did the family know that the persecution they faced in Somalia would follow them to Kenya.
Nearing his house with the supplies his mother had asked him to purchase, Ahmed was attacked by six Somali Muslims with iron rods and wooden clubs. Ahmed remembers little, as he soon lost consciousness. His assailants, thinking he was dead, dropped him off bleeding and naked outside the gate of a Presbyterian church as a “warning” to other Christians. The church guards called his mother and immediately took him to the hospital.
“When I reached the scene of the attack, my son was lying in a pool of blood. The attackers had covered my son all over with dirt,” Ahmed’s mother told ICC.
At the hospital, Ahmed received a blood transfusion and eventually regained consciousness, but a slow and arduous healing process awaited him.
When ICC visited Ahmed a month after the attack, he was still badly bruised, could hardly see out of his right eye, which was black, and was missing teeth. However, in January 2012, ICC paid for Ahmed’s medication and dental surgery, moved the family into a safe neighborhood, and provided them with a shop to sell food and other goods.
Today, Ahmed’s health has greatly improved and the family is also now safe from threats and abuse, living far away from the Somalis who attacked them. Additionally, the small business has already provided a sustainable monthly income for the family which supports their monthly rent, food, and has even enabled some of Ahmed’s younger siblings to enroll in the local school.