Providing an Income to an Egyptian Widow

Sama’an Nazmi, a Coptic Christian from the garbage slums of Manshier Nasr in Mokattam, Egypt, jumped up off the couch and sprinted out the door upon hearing gunfire and screams in the streets outside. His friends had been protesting over a church that had been burned to the ground by Islamists days earlier, and Sama’an knew the crackle of gunfire meant the protests had taken a dangerous turn. 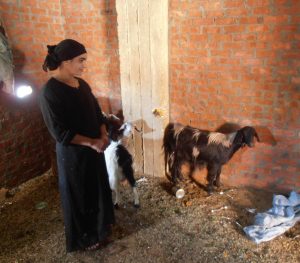 “I saw Sama’an helping an injured youth to his feet,” Sama’an’s wife, Hanea (left), who had followed her husband out the door, told ICC. “And then Sama’an dropped to the ground. I couldn’t get to him, but when he fell, I knew he was dead. I knew there was nothing I could do.”
Nine young Christian men were killed by the Egyptian military that day in March. Not only were numerous children left fatherless and wives left husbandless, but they were also deprived of their lone provider. Eleven months later, these families continue to struggle. Through partnering with a local church, ICC purchased goats and offered other means of support to help provide a sustainable income to meet each family’s needs. In the picture Hanea with ICC-purchased goats. Click the picture to learn more.